As dawn breaks, 28-year-old Javeed Ahmed Bhat paddles his wooden canoe (shikara), to the interiors of the Dal Lake in Srinagar. Soon, two other vendors join him. Bhat and the others — vegetable farmers and vendors — go past the lake’s touristy house boats and picturesque water lily and lotus farms to reach the floating vegetable market in the midst of the lake.

With no signboards and no shelter, the floating market is just a designated place where about 40-50 vendors on small boats sell vegetables and flowers to wholesale traders, who then then sell them to hoteliers and residents in Srinagar. The century-old market comes alive for two hours and ends by the time the sun rises.

Despite the unrest in the region, the market never shuts. It acts as a lifeline for the tourists and residents of Srinagar. “I am a third-generation trader who is into this business. The market thrives because the vegetables are fresh. We pick the produce just hours before selling it at the market,” Bhat says. He cultivates vegetables like spinach, carrot, cauliflower, bottle gourd and ridge gourd on three-fourth of an acre and earns Rs 12,000- Rs 15,000 a month through the morning trade.

The traders shift vegetables from one boat to another even as they bargain over the price. A few tourists visit the daily market and a few vendors who sell flowers and confectionery profit by selling it to them at a fairly higher price in the morning.

According to unofficial estimate, about 1,250 acres of land, one-fourth of Dal Lake’s area, are under vegetable cultivation. But all is not well. A few vendors say the demand for the vegetable and flowers are directly proportional to the tourist inflow in Kashmir, and that they see a sharp fall with the rising tensions and militancy in the region.

“About two years ago, I used to sell flowers worth Rs 4,000, both to tourists and house boats. But today, I make only about half of it as there are fewer tourists visiting Dal Lake,” says 22-year-old Dilawar Hussain. Hussain goes around the lake thoughout the day looking for potential customers to buy his lilies, snapdragons and California poppies among others.

Another vendor, Mushtaq Hussain, says the market is losing its sheen as the government relocated some of the farmers to the outskirts of the city owing the pollution in the lake. “The lake authorities asked a few farmers to move out of the lake so that they could clean the lake. It led to fall in the number of vendors,” said Hussain.

While the farmers say there were about 160-200 vendors who assembled at the market five years ago, it has now reduced by a third.

“Thankfully, neither the political instability, nor the changing weather affected the functioning of the market,” he says. 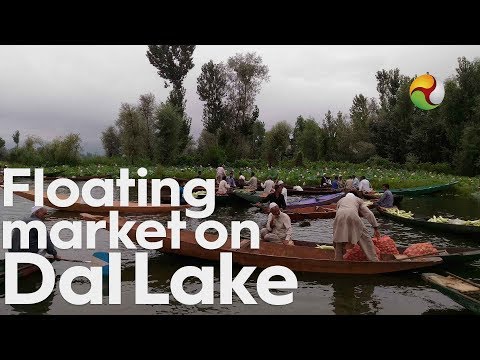