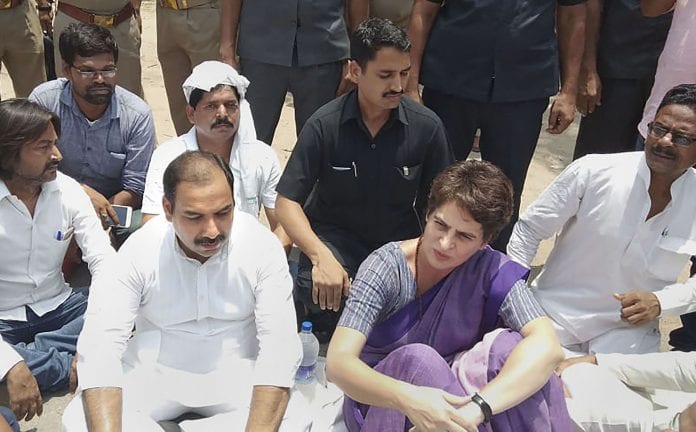 The Congress has directed all its state units to hold dharna in protest against the detention of party leader Priyanka Gandhi Vadra in Mirzapur on Friday (July 18) and for not allowing her to visit Sonbhadra, where section 144 has been imposed. Priyanka was stopped in Mirzapur on her way to Sonbhadra, where a clash on Wednesday had claimed the life of 10 people, to meet the victims. On being stopped, she took to a sit-in demonstration, following which, the police detained her.

Conceding that India would become a $5 trillion economy by 2024, former President Pranab Mukherjee on Thursday (July 18) said that India would attain that status only because of the strong foundation left by previous governments. He further said that the founders of modern India firmly believed in a planned economy. This was in reference to Union finance minister Nirmala Sitharaman’s budger speech in which she had said that the goal is to make India a $5 trillion economy by 2024.

The Supreme Court on Friday (July 19) asked the special judge conducting trial in the politically sensitive 1992 Babri Masjid demolition case, involving BJP veterans such as L K Advani, M M Joshi and Uma Bharti, to deliver the verdict within nine months from today. A bench of Justices R F Nariman and Surya Kant said the recording of evidence in the case should be completed within six months. The bench also directed the Uttar Pradesh government to pass appropriate orders within four weeks to extend the tenure of the special judge, who is set to retire on September 30.

Master Blaster Sachin Tendulkar has been inducted into the International Cricket Council’s Hall of Fame. Fans and fellow cricketers cannot congratulate him enough for the achievement. ICC, on its official Twitter handle, asked fans if there has ever been a cricketer quite like Tendulkar and the reactions of his fellow mates clear all the doubts. Tendulkar became the sixth India to be inducted into the ICC Hall of Fame after Sunil Gavaskar, Bishan Singh Bedi, Kapil Dev, Anil Kumble and Rahul Dravid.

Black female as new 007: Why it shouldn’t shake or stir us

The introduction of a female James Bond in the upcoming installment of the famous franchise literally shook and stirred the world. While the news spread like wildfire with #femalejamesbond trending on Twitter, very few of them cared to clarify that Lashana Lynch – the new 007 – will feature in the movie for a short while, like an extended cameo. Her character will be assigned the job of cajoling a dejected Daniel Craig – who plays James Bond- to come back for an assignment.

The real estate market, which saw a raft of reforms in the last two years, continues to recover as home sales rose in the first quarter of 2019 despite fewer launches. However, full recovery, is still far from sight. Over the past few years, real estate market was reeling under the impact of the triple whammy of demonetisation, the roll-out of goods and services tax (GST), and the introduction of new real estate regulations (RERA).