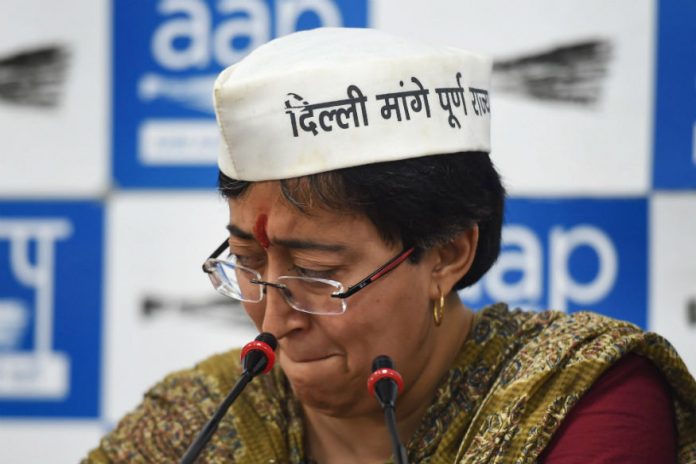 With the 48-hour silence period ahead of the May 12 Lok Sabha polls kicking in on Friday evening (May 10), Delhi saw leaders from across political parties sweating it out in the seven constituencies, reaching out to voters. While all three major parties — the BJP, the Aam Aadmi Party and the Congress — have pressed the pedal against their opponents, the national capital saw star campaigners like Prime Minister Narendra Modi addressing a mega BJP rally at Ramlila Maidan and Priyanka Gandhi campaigning for Congress’s Sheila Dikshit (North East Delhi) and Vijender Singh (South Delhi). On May 9, Rahul Gandhi rallied behind East Delhi candidate Arvinder Singh Lovely. Delhi also saw actors Swara Bhasker, Gul Panag, Prakash Raj and Gujarat MLA Jignesh Mevani adding star power to the Aam Aadmi Party’s campaign.

In Bhopal, a tale of two competing brands of Hinduism

In Bhopal, this year’s election is not about choosing a parliamentarian. It is instead a referendum on two competing brands of Hinduism. One is the Hinduism, rather Hindutva, of Pragya Thakur of the BJP, exemplified by her in-your-face symbolism: flaming saffron robes, rudraksha mala (garland), a huge vermillion stain on the forehead and a predilection for invoking the name of Rama, Ganga maiyya (mother), Sita mata (mother) and gau (cow) mata in almost every sentence. For every question she has a simple answer: A lyrical ode to the Ganges sung to an impromptu beat of the table or clapping of hands. When she is not doing this in private, Pragya makes a bigger dance and song of her faith, dancing and singing in satsangs (public events) at temples and on Bhopal’s roads.

Andhra Pradesh’s Tribal welfare minister Kidari Sravan Kumar, the youngest member in the cabinet, was forced to resign on Thursday (May 9) under peculiar circumstances. Sravan, a 29-year old engineering graduate from IIT (BHU), Varanasi, was inducted into the cabinet on November 11 last year, nearly two months after his father and the ruling Telugu Desam Party (TDP) MLA Kidari Sarveshwar Rao was gunned down by Maoists in Visakhapatnam district. Since he is not a member of the Assembly or the Legislative Council, it is mandatory, as per the constitutional provisions, for him to become a lawmaker within the six-month period from the day of induction into the cabinet. The mandatory period ends on May 11.

Prime Minister Narendra Modi’s claim that former Prime Minister Rajiv Gandhi used the warship INS Viraat for a family vacation in 1987 has triggered responses from retired Navy officers, along with the chief of Navy. Former Chief of Navy Retired Admiral Laxminarayan Ramdas has refuted PM Modi’s claims that former Prime Minister Rajiv Gandhi used INS Viraat for a family vacation to Lakshadweep. Ramdas, who was on board the INS Viraat as the flag officer commanding-in-chief of Southern Naval Command, said only the former prime minister and his wife Sonia Gandhi were on board the warship. They were going to Lakshadweep to chair a meeting of the Islands Development Authority in December 1987.

The TIME magazine has featured Prime Minister Narendra Modi on the cover of its international edition with a controversial headline and a secondary one that reads “Modi the Reformer” as the country enters the final phase of the mammoth general election. The American magazines May 20, 2019 international editions — the Europe, Middle East and Africa, Asia and South Pacific — feature the Modi cover story with the main headline “Indias Divider in Chief” while the US edition has a cover story on Democrat Elizabeth Warren who is running for the White House in 2020.

IAF fighter jets on Friday (May 10) intercepted a Georgian An-12 aircraft flying from Tbilisi to Delhi via Karachi and forced it to land at the Jaipur airport after the plane entered the Indian air space from an unscheduled point, officials said. They said the crew members of the aircraft were questioned at Jaipur and the plane was being allowed to leave. The aircraft did not follow the authorised Air Traffic Services (ATS) route and was “shadowed and forced” to land at Jaipur for necessary investigation when it was flying at 27,000 ft, the officials said. The IAF said the aircraft entered Indian air space in North Gujarat sector at 3:15 pm and the air defence interceptor on operational readiness was scrambled and vectored towards the unknown aircraft for investigation.

Scientists in Mumbai have found the presence of giant viruses (GV) in water samples. While giant viruses have already been discovered, this is the first time GVs have been found in India. Called the Bandra megavirus or Kurlavirus, the virus measures 465 nanometre, which is much larger than some microorganisms. For comparison, most viruses are smaller than bacteria and range from 5nm to 300nm. The Bandra megavirus is the largest GV discovered in India so far. The other virus species discovered are the Powai lake megavirus (PLMV), Mimivirus Bombay (MVB) and Kurlavirus (KUV).

Modi obsessed with my family, best of luck to him:  Rahul

The Prime Minister and the BJP are obsessed with my family and that is where the former is going to find escape, Congress president Rahul Gandhi has said. Responding to PM Narendra Modi’s allegation that ex-PM Rajiv Gandhi had used Navy’s aircraft carrier INS Viraat for a personal vacation to Lakshadweep in 1987, he said, “Why would anyone holiday on an aircraft carrier? It’s not a cruise ship.”  Stating that he had indeed boarded the aircraft carrier, Rahul said it was not a vacation but an official trip. Rahul Gandhi said he did not think of his family as much as PM Modi did. “Mr Narendra Modi is obsessed with my family. I’m not obsessed with my family. I don’t think about my father, grandmother or great-grandfather as much as Mr Modi does. He thinks that that’s the place where he’s going to find his escape. Best of luck to him,” he said.

One of the most well-known writers in Tamil literary world, Thoppil Mohamed Meeran, breathed his last on Friday at 1.20 am at his home in Tirunelveli, after a brief illness. He was 75 and is survived by wife and two sons. Born on 24 September 1944 in Thengapattinam, a small hamlet near Marthandam, Kanyakumari district. From the early days, he was influenced by the works of Malayalam writers. Meeran’s first short story in Tamil was published in a Chennai-based magazine called ‘Pirai’ in 1968. Titled ‘Naragabhoomiyil,’ it was originally written in Malayalam, and then translated into Tamil by Nilamudeen. In 2018, that story celebrated its 50th anniversary. One of his Tamil short stories titled ‘Thalaikkulam’, has been included in the new syllabus for class 12 in the Tamil Nadu State Board.

Three labourers died of suffocation while cleaning the sewage treatment plant (STP) of a housing complex here shortly after midnight Friday (May 10), civic officials said. A total of eight labourers were involved in the STP cleaning operation in the complex in Kapurbawdi when they got stuck inside the plant, said Santosh Kadam, chief of the Regional Disaster Management Cell of the Thane Municipal Corporation (TMC).

The Supreme Court on Friday (May 10), stayed the Madras High Court order that curtailed the powers of Puducherry’s Lieutenant Governor saying she cannot interfere in the day-to-day affairs of the government, a report by Indian Express said. The court also issued a notice to Congress leader K Laksminarayanan, who had filed a plea in the Madras High Court alleging that Bedi was running a “parallel government” in Puducherry.

State Bank of India chairman Rajnish Kumar on Friday (May 10) said the lenders have received two “unsolicited” bids for Jet Airways and “one” more is expected by the end of the day, keeping the hopes for the revival of the grounded carrier alive. The consortium of 26 lenders, led by State Bank which now owns 51 percent in the airline, had invited expressions of interest (EoIs) between April 8 and 12 and had received four preliminary bids. Friday is the last day to submit financial bids and media reports said none of the four bidders — private equity firms IndiGo Partners and TPG, and Jets strategic partner Etihad and the countrys sovereign wealth fund NIIF — are likely RPT likely to submit financial bid.