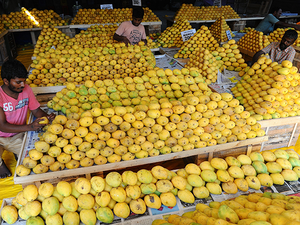 Mango exporters are looking at an estimated loss of nearly ₹1,000 crores this season. Pic: PTI

According to studies, nearly Rs 200 million dollars is earned through the export of mango and mango-based products every year. The export value of fresh mangoes had increased from ₹35.2 crore in 1991-92 to ₹215.09 crores in 2016. The major export markets for Indian mangoes are UAE, United Kingdom, Saudi Arabia, Qatar, Kuwait, Nepal, Bahrain and Bangladesh, both in quantity and value terms.

But from the year 2016, a downward trend has been witnessed in the export of mangoes in India. The exports, which were increasing till 2016, suddenly started dropping from 2017. According to the Ministry of Commerce & Industry, India, which had exported mangoes and its products worth US$195 million in 2016, was able to export mangoes just worth US$121 million in 2018.

“Mango exports in the year 2020 and 2021, nearly 70-80 per cent, were completely washed away due to the COVID-19 pandemic. The situation earlier was also not good. We are facing export losses since 2016,” said Madhubhai Bhoya, a Gujarat-based mango exporter.

The decrease was estimated primarily due to the decline in mango production in Karnataka, West Bengal, Bihar, Telangana and Maharashtra, Union Agriculture Minister Narendra Singh Tomar said in his written reply in Rajya Sabha.

The leading states in mango production in India are Maharashtra, Gujarat, Andhra Pradesh, Uttar Pradesh, Karnataka and Bihar. All these states have been experiencing extreme weather events in the last few years.

There have been major cyclones which landed in coastal states of India in the last four years like Tauktae, Nisarga, Hikka, Maha, Vayu, Karr, Fani Bulnul and Amphan. Dr Roxy Mathew Koll, a scientist at the Indian Institute of Tropical Meteorology (IITM) in Pune, said, “The Indian Ocean is warming rapidly due to which severe cyclones are increasing.

“The ocean surface temperature has increased by 1.2 degree celsius. There is a clear climate change observed in the ocean due to which cyclones have increased from the year 2016 and they are impacting the growth of every crop in the coastal regions, be it mango or any other crop,” added Dr Roxy.

Experts also flagged the issue of flood and drought cycles in coastal states like Maharashtra, Karnataka, Gujarat and Madhya Pradesh. Akhilesh Chipli, a member of a non-governmental organisation SWAN and Man (Save-Wild-Atmosphere-Nature and Man), said, “The rainfall pattern has changed to either flood or drought due to deforestation. This resulted in crop damage, including of the mango, in the coastal states.”

Indian Institute of Horticultural Research (IIHR) in a study mentioned, “Climatic change and unseasonal rain regularly dampen the prospects of mango farmers in southern India. Late flowering, delayed fruit maturity and the resultant delay in harvest led to the mangoes being subjected to rains leading to a very poor quality.”

“On the other hand, with the prevailing severe cold, dew and fog during the nights and increasing temperatures during the day, the mango flowering is subjected to damage in northern plains. However, throughout the country, the rain and hailstorm accompanied by strong winds are other climatic factors severely damaging the yields of mango crop,” the study added.

Rakesh Singh, a mango farmer from Uttar Pradesh, said, “Due to the lockdown, my mangoes have been sold at half the price. The demand for mangoes also has come down. There was a two-month strict lockdown in the second wave, the same was in the first wave as well. Entire sales have drowned. I am managing my needs by taking loans.”

Dr R S Patil, professor at Department of Agriculture Economics and Statistics, Dr P D K V University in Maharashtra, said, “The extreme lockdowns and restriction for imports in various countries like the UK and the Middle East, which imports the highest number of mangoes from India have hit Indian mango farmers and exporters.”

“Mango exporters are looking at an estimated loss of nearly ₹1,000 crores this season. A similar kind of loss happened last season as well. The Alphonso and Kesar mangoes have been majorly exported to other countries. Gujarat produces Kesar Mangoes and Maharashtra Alphonso,” he added.

“So, this is a double-edged sword for Maharashtra and Gujarat farmers as their mangoes were neither exported nor sold locally. The farmers of Andhra Pradesh, UP and other states too are witnessing huge losses due to COVID lockdowns and people’s apprehensions about mangoes and the COVID-19 virus,” Dr Patil said.