Even as the COVID pandemic was taking its toll, India lost about $87 billion in 2020 to natural disasters such as droughts, cyclones and floods. India was the second most impacted nation from the effects of global warming on lives and property, reveals a report by the World Meteorological Organization (WMO).

Topping the list was China, which lost $238 million to natural calamities, said the report, titled The State of the Climate in Asia 2020. At $85 billion, Japan came in third.

“Extreme weather and climate change impacts across Asia in 2020 caused the loss of life of thousands of people, displaced millions of others and cost hundreds of billions of dollars, while wreaking a heavy toll on infrastructure and ecosystems,” said the WMO, the weather agency of the UN. “Sustainable development is threatened, with food and water insecurity, health risks and environmental degradation on the rise.”

The report said 2020 was the warmest year on record for Asia. The mean temperature was nearly 1.4 degrees Celsius above the average of the 1981-2010 period. Therefore, droughts caused the maximum damage in the continent.

Several places witnessed extreme heat during the year, the report said, pointing out that Verkhoyansk in Russia saw the highest known temperature within the Arctic Circle at 38 degrees Celsius.

With droughts on the one hand, Asia also witnessed frequent cyclones and floods, since the East and South Asian summer monsoon were unusually active. Cyclones, floods and landslides led to loss of life and triggered widespread displacement, said the WMO report. 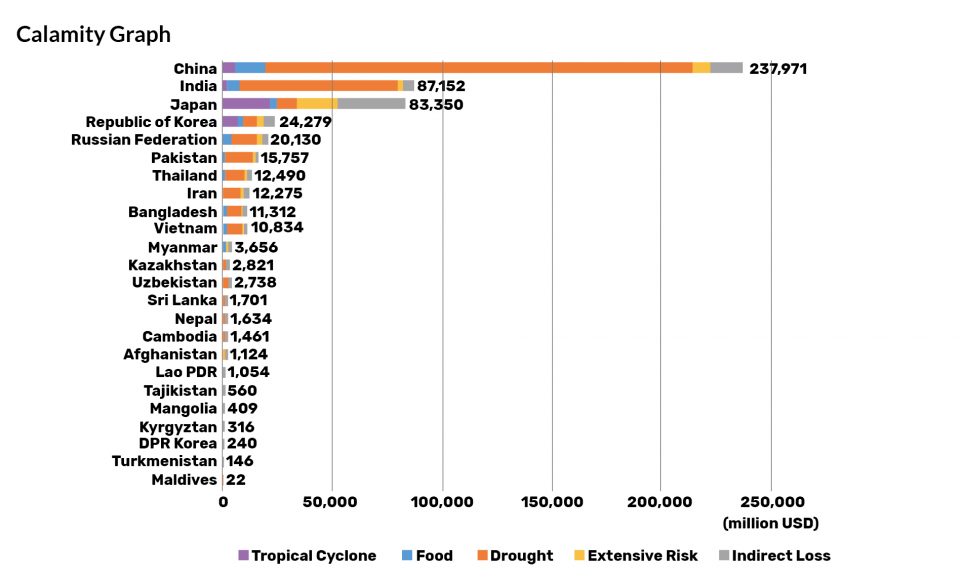 The report also highlighted the extent of the global climate crisis. “In 2020, average sea surface temperatures reached record high values in the Indian Ocean, Pacific Ocean and the Arctic Ocean,” the WMO said. “Sea surface temperatures and ocean warming in and around Asia are increasing more than the global average — at three times the rate in the case of the Arabian Sea.” It may be noted that warmer sea surfaces raise the probability of severe storms.

The report observed that progress on food security and nutrition slowed globally. “In 2020, 48.8 million people in South-East Asia, 305.7 million in South Asia and 42.3 million in West Asia are estimated to have been undernourished. Asia accounts for more than half of the global total,” it said.

This is without fully taking into account the impact of COVID on agriculture and food security. For a comparison, though, against 2019, the number of undernourished people in 2020 increased by 6% in South-East Asia and West Asia, and by 20% in South Asia, it said. Climate-related disasters compounded the problem.

The State of the Climate in Asia 2020, a multi-agency report coordinated by the WMO, offers an overview of land and ocean temperatures, precipitation, glacier retreat, shrinking sea ice, sea level rise and severe weather. “It examines socio-economic impacts in a year when the region was also struggling with the COVID pandemic, which in turn complicated disaster management,” said a WMO statement.