Prime Minister Narendra Modi on Tuesday (October 20) addressed the nation to convey his wishes ahead of the festive season and also reminded the citizens that the pandemic is still around, cautioning them against behaviours that may lead to a spike across the country.

“In this festive season, markets are bright again but we need to remember lockdown might have ended, but COVID-19 still persists. With efforts of every Indian over last 7-8 months, India is in a stable situation we must not let it deteriorate,” ANI quoted Modi as saying. 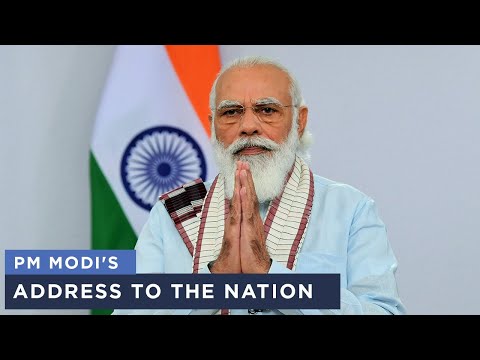 The prime minister has addressed the nation a number of times during the ongoing COVID-19 crisis in which he has spoken about various measures, including lockdown, being taken to curb the pandemic and also announced economic and welfare packages.

On Tuesday, he also hailed India’s current recovery rate as good and said the fatality rate is low. Striking a comparison with the other worst-affected countries, the prime minister said, “5,500 people out of every 10 lakh population in India are infected, whereas in countries like the US and Brazil this figure is around 25,000.”

“The fatality rate in India is 83 out of every 10 lakh population in India, whereas it is more than 600 in countries like the US, Brazil, Spain, Britain,” he added.

Cautioning the citizens against negligent behaviour, Modi recalled some photos and videos where it was “clearly seen that people are not careful anymore.” “This is not right. If you step out without mask, you put your families at risk. We must remember – whether it is America or Europe, cases declined and then there was sudden spike,” he said.

Modi said India currently has a facility of more than 90 lakh beds for COVID-19 patients. There are 12,000 quarantine centres, around 2,000 coronavirus testing labs. “The number of tests will cross 10 crore soon. In our fight against COVID, rise in the number of tests has been our strength,” he said.

About the vaccine, the prime minister said: “All countries are working on a war-footing for making COVID-19 vaccine. The government is preparing for making the vaccine accessible to every Indian as soon as it is made available.”

Will be sharing a message with my fellow citizens at 6 PM this evening.

India today reported 46,790 fresh cases, with the number dipping below the 50,000-mark for the first time in three months. India’s current caseload is 75,97,063, according to Union Health Ministry data updated in the morning. Meanwhile, the death toll climbed to 1,15,197 with 587 fatalities being registered in a span of 24 hours.

Ruckus in LS over Mahua Moitra’s “...