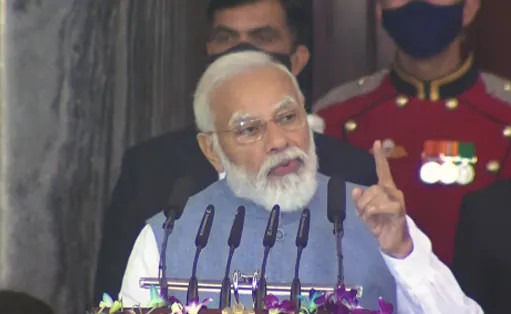 The PM was speaking on Constitution Day on Friday. (Photo: Twitter)

Prime Minister Narendra Modi in his Constitution Day speech on Friday called for erasing the “colonial mindset” that exists only to “thwart India’s growth”.

Modi, speaking at Delhi’s Vigyan Bhawan in the presence of Chief Justice of India NV Ramana, talked about developed nations that have been trying to persuade India to cut down carbon emissions, when these nations have themselves been the biggest emitters of carbon and have benefitted from fossil fuel-powered industrial growth, long before emerging economies could see proper growth, reported NDTV.

“The colonial mindset hasn’t gone. We are seeing from developed nations that the path that made them developed is being closed for developing nations… If we talk about absolute cumulative (carbon) emissions, rich nations have emitted 15 times more from 1850 till now,” the PM said. “The per capita emission is also 11 times more in the US and the EU.”

Also read: Nuclear energy gets a seat at COP26 table; to be part of solution to climate change

India, at the COP26 climate talks held in Scotland earlier this month, asked developed nations to reach net zero emissions faster so that emerging economies can use some “carbon space” to drive growth.

“Sadly, we have such people in our country who stall the development of the nation in the name of freedom of expression without understanding the aspirations of the nation. Such people don’t bear the brunt, but those mothers who get no electricity for their children bear it,” the PM was quoted as saying.