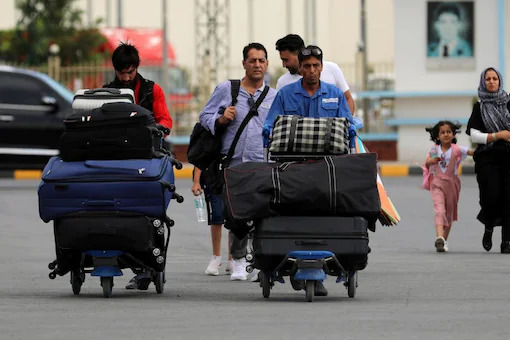 Ministry of Home Affairs said in a statement that all Afghan nationals henceforth must travel to India only on e-Visa. File Photo

“Owing to the prevailing security situation in Afghanistan and streamlining of the visa process by introduction of the e-Emergency X-Misc visa, it has been decided that all Afghan nationals henceforth must travel to India only on e-Visa,” Ministry of Home Affairs (MHA) said in a statement.

“Keeping in view some reports that certain passports of Afghan nationals have been misplaced, previously issued visas to all Afghan nationals, who are presently not in India, stand invalidated with immediate effect. Afghan nationals wishing to travel to India may apply for e-Visa at www.indianvisaonline.gov.in,” said the statement.

Also read: Afghanistan: What the conflict means for the global heroin trade

India had started accepting e-visa application for Afghans after the Indian embassy in Kabul was shut due to security challenges. Several Afghan nationals who have worked with erstwhile Afghan government and security agencies have sought India’s help for asylum amid Taliban takeover in Afghanistan.

Several Afghan passports with Indian visas were stolen at a private travel agency in Kabul after it was raided by an armed group of Urdu-speaking men backed by Pakistan ISI between August 15 and 16 soon, after the Taliban takeover in the city, CNN-News18 reported.

The private travel agency reportedly works in coordination with the Indian embassy in Kabul for facilitating Indian visas for Afghans.

“We are still trying to assess how many passports have been stolen. The Ministry of External Affairs and security agencies are looking into it. All those Afghan passports had Indian visas on it and could be misused by terror groups”, CNN-News18 quoted sources as saying.

India has launched a massive evacuation mission with the IAF and Air India working closely with Indian diplomats and security agencies for a safe and secure rescue of Indian nationals and other threatened groups in Kabul.

Over 800 individuals have been rescued by multiple flights of Indian Air Force C-17 aircraft. The security of Kabul has reportedly been taken over by Haqqani network which has been a Pakistan proxy for years.