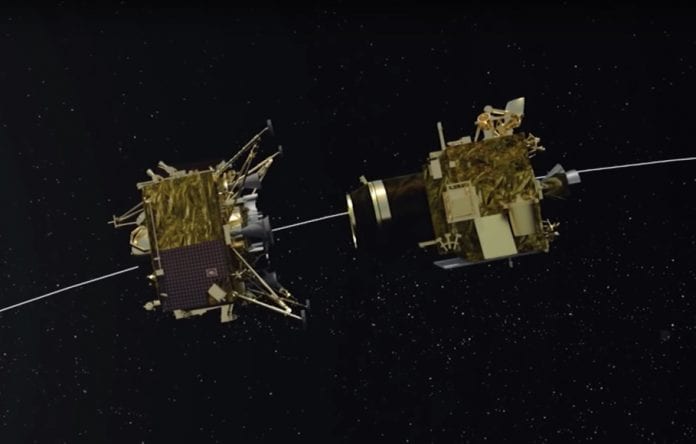 The Vikram Lander of Chandrayaan-2 spacecraft successfully separated from the Orbiter at 1.15 pm on Monday (September 2). The Indian Space Research Organisation (ISRO) announced the feat through a tweet on Monday.

On Sunday the final and fifth lunar bound orbit manoeuvre for Chandrayaan-2 spacecraft was performed successfully at 6:21 PM (IST).

While sharing the news on Twitter, the space agency said that the duration of the manoeuvre was 52 seconds and the orbit achieved was 119 km x 127 km. On August 30, the spacecraft had successfully performed it fourth Lunar bound orbit manoeuvre.

The Vikram Lander is expected to separate from the Chandrayaan-2 orbiter on Monday (September 2), following which, the Lander will perform two deorbit manoeuvres to prepare for its landing on the south polar region of the moon, the ISRO said. The final manoeuvres are expected to be performed on September 3 and 4.

The Lander is scheduled to touch down on Lunar surface between 1:30 AM and 2:30 AM (IST) on September 7.

Earlier on August 26, the ISRO had shared an image of the moon’s surface taken by the Terrain Mapping Camera-2 (TMC-2) of the Chandrayaan-2. The picture was taken on August 23 at an altitude of about 4,375 km, and showed Jackson, Mach, Korolev and Mitra craters. The Mitra crater was named after Prof. Sisir Kumar Mitra, an Indian physicist from Kolkata.

Chandrayaan-2 is an advanced version of the previous Chandrayaan-1 mission, which had 11 payloads and was credited for the discovery of water on the lunar surface.

All you need to know about three types of solar eclipses