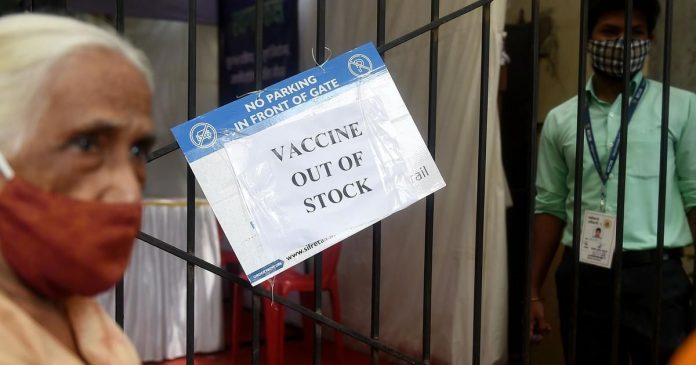 A notice hung outside a vaccination centre in Mumbai which ran out of vaccines. PTI File Photo

Amid widespread criticism of the Centre’s vaccine pricing policy, the Centre has defended it in an affidavit submitted to the Supreme Court ahead of a hearing on May 10, warning against “judicial interference.”

The Supreme Court last week directed the Centre to reconsider prices “to ensure it withstands scrutiny of Articles 14 (equality before law) and Article 21 (protection of life and personal liberty)”.

The government has argued that the policy is based on the concept of creating an incentivized demand for private players and to attract offshore manufacturers to ensure increased availability of vaccine.

It contended that the policy was framed keeping in mind limited availability of vaccines, the vulnerability of age groups, and the fact that vaccinating the entire country was not possible in one go due to the suddenness of the pandemic.

Cautioning against “judicial interference, the affidavit says: “overzealous, though well-meaning, intervention may lead to unforeseen and unintended consequences”.

It says the response and strategy of the nation is completely driven by expert medical and scientific opinion. “In the absence of any expert advice or administrative experience, it leaves doctors, scientists, experts and executive very little room to find innovative solutions on the go,” the Centre said.

“Pricing of vaccines is not only reasonable but uniform across the country after government persuasion with two vaccine companies,” the Centre argues.

The Centre noted that several states had announced plans to vaccinate the 18-45 age group for free, and that crematorium workers, and panchayat workers in rural areas, were “frontline workers” and so eligible for the vaccine.

The row over vaccine prices erupted after the manufacturers, the Serum Institute and Bharat Biotech, announced different prices for the Centre, state governments and private hospitals. The Centre is expected to spend only ₹ 150 per dose of either SII’s Covishield or Bharat Biotech’s Covaxin. But states have been told to pay ₹ 400 per dose of Covaxin and private hospitals ₹ 1,200. Covishield is supposed to cost ₹ 300 per dose for states and ₹ 600 for private hospitals. The prices were revised after several requests from the Centre, states and other stakeholders.

The Supreme Court said last week that forcing states to hold talks with manufacturers on grounds of promoting competition and making it attractive for new manufacturers would adversely affect those in the 18-44 age group whose vaccination has just begun.

So far two vaccine options are available, with a third, Russia’s Sputnik V, having been cleared for emergency use. In its affidavit, the Centre said it is in consultation with manufacturers such as Pfizer, Moderna and Johnson & Johnson to bring in their products.

International medical journal The Lancet has called the vaccination pricing policy as “botched,” saying the government had vaccinated less than two per cent of the population so far.

The Congress lambasted the Centre for “vaccine profiteering,” sarcastically reminding it of the “one nation, one price” slogan.

The government has maintained that its current vaccination strategy is to focus on priority areas and to allow enhanced production and further research and development to continue and expand with full potential without any real or perceived constrictions.

“Sometimes, steps that are taken for immediate needs, to tide over an imminent crisis, may turn out to be imprudent in the long run,” it said. However, the steps need to be appreciated, keeping in mind the complete strategy, policy and holistic picture.