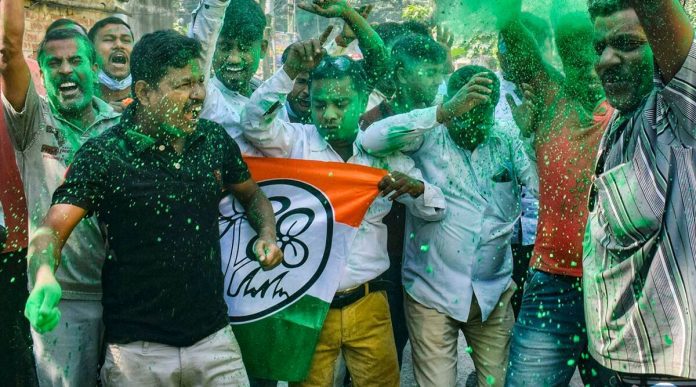 TMC supporters celebrate in Nadia in West Bengal after their candidate wins in the Santipur assembly constituency by-elections on November 2, 2021. Pic: PTI

There was a turnout of 50 per cent to 80 per cent during voting in these LS and assembly constituencies which went to the polls on October 30.

Taking responsibility for the defeat, the Himachal Pradesh CM Jairam Thakur has said that he accepts the results and congratulates the winners. “The BJP fought hard, but the results are not in keeping with our expectations. We will definitely study the lessons learned in these bypolls and learn for the future… for the 2022 election,” Thakur told reporters.

BJP is holding its fort in Assam, winning the bypoll to Thowra, Bhabanipur, Mariani seats in Assam, while its ally UPPL claimed victory in Gossaigaon. The saffron party also clinched the Jobat assembly seat, a reserved ST seat in Madhya Pradesh, and is leading in the Khandwa Lok Sabha seat and Prithvipur assembly seat. BJP candidate Sushanta Borgohain, who switched over from the Congress, won the Thowra seat by a margin of 30,561 votes for a third term, the EC said.

The BJP however has suffered a big shock in Karnataka, especially in the home turf of CM Basavraj Bommai. Congress candidate Srinivas Mane won the Hanagal bypoll with a margin of 7,598 votes defeating the BJP candidate Shivaraja Sajjan. Bommai, who is completing 100 days in office, had camped in Hanagal to ensure a BJP victory and was hoping to win by a small margin as the Congress candidate is popular in the area. T

The big loss in Hanagal has come as a shock to Bommai, said a News18 report. While ANI quoted Karnataka Congress President DK Shivakumar as saying, “Let us go by the wishes of the people of Karnataka…They are looking towards change.”

The counting of votes is underway today (November 2) in the crucial by-polls in three Lok Sabha and 29 Assembly seats, across 13 states and the Union Territory of Dadra and Nagra Haveli. The polling was held on October 30, an exercise being seen as a barometer of the political mood in the country ahead of assembly elections in politically critical Uttar Pradesh, as well as other states.

There has been no discernible wave, but some states stood out. The voters in Assam and West Bengal, for example, have given a decisive thumbs up to the ruling alliances. However, in Himachal Pradesh, the ruling BJP significantly lost three seats to the Opposition Congress.

Shiv Sena candidate Kalaben Delkar, the wife of former MP Mohan Delkar who had allegedly died by suicide, has won with a margin of 47,447 votes after twenty-two rounds of counting for the Dadra and Nagar Haveli Lok Sabha seat.

She defeated BJP candidate Mahesh Gavit garnering 1,12,741 votes, while her close rival, Gavit, got 63,382 votes, the EC website updated at 2:05 pm showed.In the parliamentary seat of Khandwa in Madhya Pradesh, the ruling BJPs Gyaneshwar Patil was ahead of his Congress rival Rajnarayan Singh Purni.

Assembly by-elections were held in five seats in Assam, four in West Bengal, three each in Madhya Pradesh, Himachal Pradesh and Meghalaya, two each in Bihar, Karnataka and Rajasthan and one seat each is in Andhra Pradesh, Haryana, Maharashtra, Mizoram and Telangana. Of the 29, the BJP had won in around half a dozen constituencies earlier, the Congress had nine, while the rest were with regional parties.

Assam: The ruling BJP and its allies looked set to win all the five assembly seats in the state. All three candidates, Phanidhar Talukdar, Rupjyoti Kurmi and Sushanta Borgohain, were elected to the assembly in the general elections in March-April this year on Opposition party tickets but subsequently resigned and joined the BJP.

Andhra Pradesh: The ruling YSR Congress Dasari Sudha, the widow of the late Venkata Subbaiah, the sitting legislator, trounced the BJPs Panatala Suresh in Badvel with a huge margin in a one-sided contest. YSRCP candidate Dr D Sudha polled over 1,12,211 votes—over 77 per cent of the total votes, while BJP’s P Suresh got 21,678 votes and Congress got less than 700 votes

Haryana: INLD secretary general Abhay Singh Chautala was ahead of his nearest rival, Gobind Kanda of the ruling BJP, in the Ellenabad assembly constituency.

Madhya Pradesh: Congress has also reclaimed Madhya Pradesh’s Raigon after 31 years, with Kaplana Verma winning with a margin of 12,096 votes. The BJP has clinched the Jobat assembly seat, a reserved ST seat, and is leading in the Khandwa Lok Sabha seat and Prithvipur assembly seat.

Maharashtra: Congress’s Jitesh Antapurkar is close to comfortably bagging the keenly faught Deglur assembly bypoll, leading by 39,400 votes over BJP’s Subhash Sabane at the end of Round 27.

The bypoll was nessesitated by his father Raosaheb Antapurkar’s death. leading over BJPs Subhash Pirajirao Sabne in the Deglur (SC) Assembly bypoll.

Mizoram: The ruling Mizo National Front (MNF)’s K Laldawngliana won the bypoll to the Tuirial assembly seat in Mizoram by securing 39.96 per cent of the total 14,561 votes polled, as per the Election Commission. In Ellenabad, INLD’s Abhay Chautala won with a margin of over 65,000 votes.