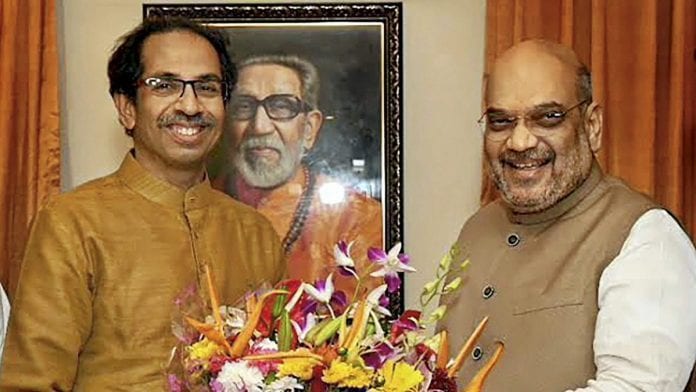 The BJP’s 50-50 deal with Shiv Sena ahead of the Assembly polls in October, may not workout anymore as the former is now eyeing 173 seats of a total of 288 Assembly seats instead of the earlier decided number of 144 seats.

A TOI report said the saffron party plans to offer 18 of the 173 seats to its smaller allies, if they agree to fight on the lotus symbol.

If the BJP’s plan materialises, Shiv Sena’s seat tally will plummet to 110 instead of the earlier aim of 144. Quoting a Shiv Sena leader, a PTI report said the party may agree to contest 135 of the total 288 seats in alliance with the BJP for the Maharashtra Assembly polls but wanted the senior NDA partner to accommodate the smaller allies.

Other sources say that the Sena was adamant on contesting 144 seats and also demanded a revolving chief ministership in the event of the NDA returning to power once again.

If the BJP gets the coveted 173 seats, it would negate the deal made between party president Amit Shah and Maharashtra Chief Minister Devendra Fadnavis; and Sena president Uddhav Thackeray in April this year to divide the seats equally between the two parties, as part of which the BJP will offer smaller alliance partners like RPI, Rashtriya Samaj Party and Shiv Sangram Sanghatana, seats from its share.

However, no such formal announcement on seat-sharing has been made yet.

“The BJP and the Sena may accept a formula to contest 135 seats each and leave 18 seats for smaller allies like the RPI(A), the Rashtriya Samaj Paksha and the Shiv Sangram Party,” PTI quoted a senior leader as saying on Tuesday (September 10).

However, the catch is that the Sena wanted the BJP to allot 18 seats to smaller allies from its own quota reasoning that they are partners of the BJP. If the BJP were to accommodate this demand, which is unlikely, the party will get to contest only 117 seats.

“The Sena may accept allotment of 18 seats for BJPs allies as part of an electoral adjustment. Let the BJP give 18 seats to the smaller allies from their quota,” he said.

Complicating the matters for the BJP, RPI (A) leader and Union minister Ramdas Athavale, RSP leader and state minister Mahadev Jankar and Vinayak Mete of the Shiv Sangram Party have refused to accept the party’s demand to contest the Assembly polls on BJP tickets. As per reports, poll managers of the BJP are demanding more than 135 seats to accommodate leaders from Opposition parties and its “growing political might”.

In 2014, both the parties had contested the Assembly elections separately – the BJP had won 122 seats against Shiv Sena’s 63.

Sena president, Uddhav Thackeray recently shared the dais with Prime Minister Narendra Modi and Chief Minister Devendra Fadnavis in Mumbai and announced that the saffron alliance for polls was “inevitable”. The seat-sharing formula of 135 seats each was first mooted by state BJP unit president Chandrakant Patil a few months ago. However, the Sena claims that BJP president Amit Shah and Fadnavis had struck an understanding with Thackeray agreeing to Sena’s demand for 144 seats and the CM post for a period of 2.5 years in the five-year term.

The run up to the polls has also witnessed migration of several politicians to the BJP-Sena camp in a bid to stay in power.

Prominent leaders like Congress’ Harshvardhan Patil and NCP’s Ganesh Naik are among those who will join the BJP, possibly emboldening the saffron party to pitch for more seats.

Pointing to this trend Sena MP Sanjay Raut on Wednesday (September 11) said that such people should give the Hindutva ideology priority over their aspirations to be an MP or MLA while joining the BJP-Sena alliance.

“The leaders who are planning to join us should come up with the full acceptance of the ideology of Hindutva. This is because our doors are not open for people who only want to become an MP, MLA or minister. We want the expansion of Hindutva ideology in both the country and the state. Therefore, if they join with a similar thought, then we shall welcome them wholeheartedly,” ANI quoted Raut as saying.