Two more persons succumbed to gunshot wounds in Assam’s Guwahati, taking the toll in police firing during violent protests against the citizenship law to four, officials said on Sunday (December 15).

Meanwhile, BJP found itself in a spot with two NDA allies, the National People’s Party (NPP) and Asom Gana Parishad (AGP), which voted with the government in the Parliament expressing unhappiness over the contentious Citizenship Amendment Act.

“Ishwar Nayak died last night and Abdul Alim succumbed to his injuries this morning,” Ramen Talukdar, Guwahati Medical College and Hospital Superintendent said. Twenty seven people were admitted to the hospital with bullet injuries since Wednesday, he added. However, protesters claimed that five persons have died in police firing during the agitation against the contentious law.

The Asom Gana Parishad (AGP) said it would file a petition in the Supreme Court praying for revocation of the Act, party leader Kumar Deepak Das said. He asserted that the AGP respected the sentiments of common people, who were wary that the law might threaten their identity and existence. “We will take the legal route to seek revocation of the amended Act as the indigenous people of Assam are apprehensive that their identity, language might come under threat,” Das said. 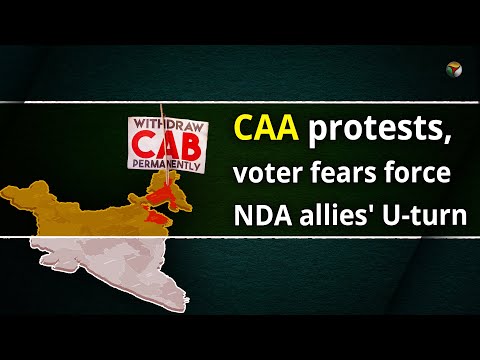 Meanwhile, NPP chief Meghalaya’s chief minister Conrad Sangma and his cabinet ministers met Amit Shah and expressed their unhappiness over the Act. “Meghalaya chief minister Conrad Sangma and his ministers said there is a problem in Meghalaya. I tried to make them understand that there is no issue. Yet, they requested me to make some changes in the act. I have asked Sangma ji to come to me when he is free after Christmas and we can think of a constructive solution for Meghalaya. Nobody has anything to fear,” said Shah.

Another ally JD(U) has been facing trouble within after political strategist and party national vice president Prashant Kishor called the exercise “demonetisation of citizenship”.

The idea of nation wide NRC is equivalent to demonetisation of citizenship….invalid till you prove it otherwise.

The biggest sufferers would be the poor and the marginalised…we know from the experience!!#NotGivingUp

“The idea of nation-wide NRC is equivalent to demonetisation of citizenship….invalid till you prove it otherwise. The biggest sufferers will be the poor and the marginalised…we know from the experience,” Kishor tweeted on Sunday morning.

Talking to reporters after meeting Kumar on Saturday night, Kishor, however, had said that the amended Citizenship Act was, per se, not a “major cause for worry” but it could be problematic in combination with the proposed NRC.

The law allows for granting citizenship to non-Muslim immigrants from Bangladesh, Pakistan and Afghanistan, while the NRC exercise would compile the names of all genuine Indian citizens.

On Wednesday, Kishor had tweeted that the legislation “could turn into a lethal combo” (with NRC) to systematically discriminate and even prosecute people based on religion.