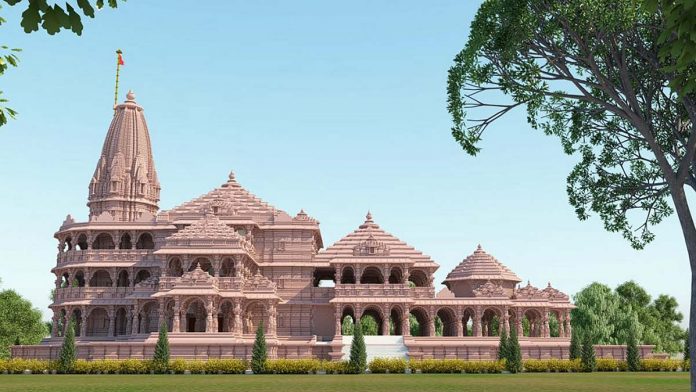 The temple complex is being built at an estimated cost of Rs 1,000 crore.

The grand Ram Mandir is on track to open in Uttar Pradesh’s Ayodhya, just in time for the Lok Sabha elections of 2024.

If all goes according to the grand plan, the project, on a 100-acre campus, is on schedule and devotees will be able to visit at least the sanctum sanctorum by December 2023.

The BJP had paved the foundation of the temple back in the 1980s, spearheading the Ram Janmabhoomi movement that resulted in the demolition of the Babri Masjid in 1992 and riots across the country.

The decades-old dispute was finally given closure by the Supreme Court in late 2019, when it ruled in favour of the Hindu side, directing the construction of a temple by a Trust at the disputed site. It ordered the Centre to allot a 5-acre plot to the Sunni Waqf Board to build a mosque at a “prominent” place in Ayodhya.

The temple, with which the BJP has often mobilised its Hindu votebank, was also one of the core promises of the party in its election manifesto, and may pay it dividends in the crucial Uttar Pradesh state elections scheduled for next year.

Prime Minister Narendra Modi had laid the foundation stone of the temple complex, being built at an estimated cost of Rs 1,000 crore, in August 2020.

Last month, a construction review meeting noted that work was proceeding on schedule. It was attended by the Treasurer of the Ram Mandir Trust Swami Govinddev Giri, General Secretary Champat Rai, members Vimlendra Mohan Pratap Mishra and Anil Mishra, as well as Nripendra Misra, chairman of the construction committee, and officials from Tata Consulting Engineers and Larsen and Toubro.

“Cooperation from the district authorities and state government was critical in procurement of specified raw material. M/s Larsen & Toubro, the implementing agency and M/s Tata Consulting Engineers, Project Monitoring Committee, have performed efficiently to complete the activity in about five months against the original estimate of about 18 months,” the Trust stated.

An initial masterplan for the campus outside the Parkota has been prepared. To diverge the crowds in attendance, a pilgrimage facilitation centre, museum, archives, a research centre, an auditorium, gaushala, and yagya shaala, are in the works. The entire plinth, including the main place of worship, will be made of marble, while copper joints instead of steel ones will be used to hold the walls together since they do not rust. The walls of the proposed temple will depict several religious themes.

The blueprint focuses on conservation and development of heritage structures like Kuber Tila and Sita Koop, and the complex has been designed on zero discharge concept and green building features.