VK Sasikala, the close aide of former chief minister J Jayalalithaa, dispelled any doubts about her political ambitions when she unveiled a stone plaque at the MGR Memorial in Chennai’s T Nagar on Sunday to mark the golden jubilee of the founding of the AIADMK.

The plaque identifies her as the general secretary of the AIADMK and makes clear Sasikala’s determination to wrest back control of the party from former CM Edappadi K Palaniswami (EPS) and his deputy O Panneerselvam (OPS). It says, in Tamil: 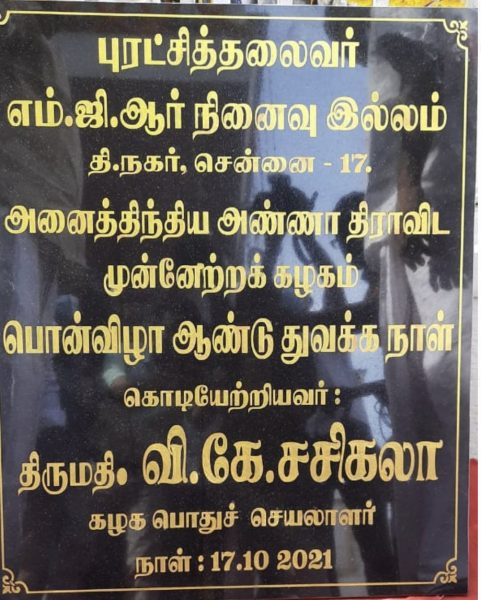 On Saturday, she had made a much publicised and emotional visit to the memorials of Jayalalithaa, MG Ramachandran and CN Annadurai, nearly four-and-a-half years after vowing at Jayalalithaa’s grave to “redeem the party”. Now, after a four-year jail sentence in the disproportionate assets case, which led to the conviction of her personal and political mentor, Sasikala is stepping into active politics again.

After Jayalalithaa’s death in 2016, Sasikala was made the temporary general secretary of the AIADMK. Before going to jail she re-inducted her nephew TTV Dhinakaran into the party and made him deputy general secretary.

That led to commotion in the party and OPS and his faction staged a revolt. In the meantime, Sasikala made EPS the chief minister. However, EPS later joined hands with OPS and sidelined Dhinakaran.

The case filed by Sasikala to quash the changes in the party bylaws is still pending before the Madras High Court.

The coming months will reveal Sasikala’s plans and their impact on the future of the AIADMK, and its rivalry with the DMK.