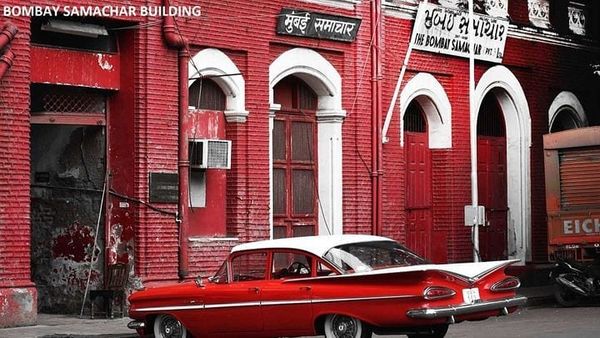 The iconic Mumbai Samachar building in south Mumbai: The 200-year-old newspaper which started out as a weekly exchanged several hands and went bankrupt and was handed over to the Cama family, who took over in 1933.

Mumbaikars are only too familiar with the iconic, colonial-era red building at Horniman Circle in south Mumbai’s Fort area, which houses the office and printing press of India’s oldest running newspaper – ‘Mumbai Samachar’.

This historic Gujarati newspaper crossed a major milestone on July 1, when it turned 200 years old. This is especially significant, in the backdrop of the sagging fortunes of India’s print media industry after the emergence of the Internet and social media. The newspaper, which has witnessed many dramatic events like the dawn of India’s independence, two world wars, communal riots, bomb blasts, a crippling pandemic etc., has survived and continues to be the eyes and ears of the public.

This newspaper, which was first published in 1822, was the brainchild of a Parsi scholar Fardoonji Murazban, who had started the publication four years after the Bengali newspaper, ‘Samachar Darpan’ was launched. And, it became the second non-English newspaper to be published in India.

Formerly called ‘Bombay Samachar’, in Gujarati however the paper has always run as Mumbai na Samachar, it started as a weekly edition primarily reporting on the movement of goods across the sea, commodities news and other business news, such as the sale of property, said an Indian Express report. It remained a weekly for the first 10 years, then a bi-weekly and then slowly evolved as a daily newspaper since 1855.

The newspaper exchanged several hands until it became bankrupt and was handed over to the Cama family, who took over in 1933. Cama Norton and Co. was a supplier of newsprint and ink to ‘Mumbai Samachar’, then owned by the Belgaumwala family.

It so happened that the Camas had approached the court against non-payment of arrears by the Belgaumwalas and sought liquidation proceedings. But the court had asked Camas to take over the newspaper and salvage it since the livelihoods of employees at the paper were at stake. The Camas agreed.

Since then the publication grew steadily and today it boasts of the most advanced technologies available in the field of publishing. Hormusji Cama, the current director, who had taken charge nearly 40 years ago, and a passionate vintage car collector, said that placing the reader in the centre is the key to the newspaper’s success.

“As long as your content is in demand, you will be around,” he told PTI. While Indian Express quoted Cama as saying: “It is great that we managed to survive for 200 years and while none of us may survive, and even print may not survive, I hope Mumbai Samachar will see 300 years.”

Sold at ₹10 a copy, this newspaper is most expensive but it has a loyal readership which keeps it alive. Though its circulation dipped in the pandemic (it was 1.5 lakh before), to limit the impact, ‘Mumbai Samachar’ reportedly increased the cover price by ₹2, reduced the number of pages and imposed cost control measures like a salary cut for senior management and no emoluments at all for those at the top to ensure that the business thrives, Cama said. It is one of the few newspapers who beat the odds to post profits for the fiscal year 2020-21, added Cama.

He added that not a single staffer of the “family” of 150 people was however retrenched. “We do not believe in retrenching people at all. People who have given us the prime of their lives cannot be asked to go because of things beyond their control like technology changes. We train them, and they adapt,” said the director proudly.

The newspaper has always been reportedly apolitical, believing in constructive criticism and focusing on positivity, Cama said, adding that it had never been sensationalist in its coverage.

Cama rued the tendency among some journalists to “embellish” news stories for grabbing attention. Meanwhile, the editor, Nilesh Dave, who joined in 2003, said becoming a part of ‘Mumbai Samachar’ had always been his life’s dream, said the IE report.

Dave said that while the entire print industry is going through financial and circulation strains because of the pandemic, “increasing fake news in the WhatsApp University means that people are going to trust newspapers. Print news is the only medium where you can’t have fake news”.