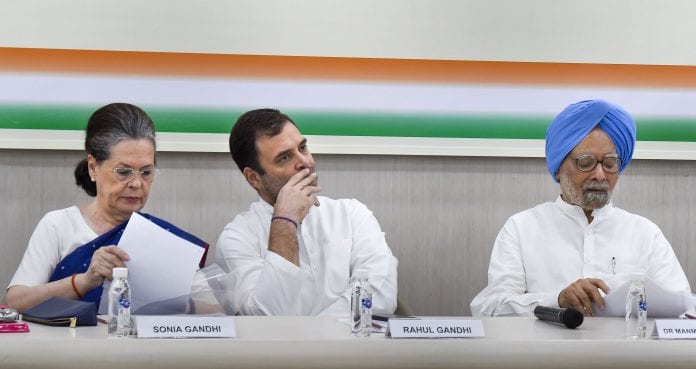 The Congress Working Committee (CWC) met for the second time on Saturday evening (August 10) to take a final call on the new party president after a number of leaders, including state chiefs and MPs, backed Rahul Gandhi to continue on the post despite his refusal to reconsider his resignation.

At the crucial meeting, the report of five regional groups formed for wider consultation on the issue will be placed, with sources saying there was a consensus on Rahul Gandhi continuing as party chief.

However, Gandhi had in the morning asserted that he would not take back his resignation, after CWC members unanimously urged him to reconsider. As the CWC members met at around 9 pm at the AICC headquarters here, Rahul Gandhi did not initially join the leaders, but sources said he was expected to attend the meeting later.

During the wider consultation process involving state PCC chiefs, Congress legislature party leaders, AICC secretaries and party MPs, only a few suggested other names while a majority of them said the party will face desertions if Rahul Gandhi does not remain the leader. Some even told Priyanka Gandhi Vadra to prevail upon Rahul to reconsider his May 25 resignation, the sources said.

The party’s top decision-making body will discuss reports of five groups, formed earlier in the day, to scrutinise names of potential successor to Rahul Gandhi.

UPA chairperson Sonia Gandhi and Rahul Gandhi recused themselves from the consultation process saying they they cannot be part of it as they have been Congress presidents in the past and would not like the opinion of the party leaders to be influenced in any manner.

“There is process of consultation and naturally Rahul ji and myself, we cannot be part of that consultation,” Sonia Gandhi told reporters. Asked how their names were in the sub-groups for consultations, she said, “That’s obviously a mistake, because we cannot be in that.”

The CWC decided to have consultations with leaders from across the country and it was divided into five groups for different regions — northeast, east, north, west and south. The CWC group for the northeast region included top party leaders such as Ahmed Patel, Ambika Soni and former Uttarakhand chief minister Harish Rawat.

Congress chief spokesperson Randeep Surjewala said several leaders who could not make it to New Delhi have been consulted over phone. The CWC, which is yet to accept Rahul Gandhis resignation, began its first meeting by urging him to continue as party chief in the wake of the BJPs “onslaught on democracy and dissent”, according to Surjewala.

Narayanasamy told reporters, “I told them that Rahul Gandhi should continue as AICC president. They asked me for an alternative, but I said there is none. We have to persuade him to withdraw his resignation because he is the only leader who can carry the party forward and strengthen it.”

Rahul Gandhi has already said the next party chief should be a non-Gandhi, making the task of Congress leaders difficult. He said that he will spend the next two days in his constituency Wayanad in flood-hit Kerala.

Clarity on the issue is expected tonight as Surjewala earlier said, “There is a sense that this impasse should end as soon as possible, which is why the CWC will meet again at 8 pm to take a call.” He said Rahul Gandhi, while refusing to continue as party chief, asked the CWC to broad-base the consultation process and engage state chiefs, CLP leaders, MPs, and AICC secretaries.

A number of partymen have expressed their opinion in public that the delay in selecting the new Congress chief is harming the party. As the Congress began the process of finding Rahul Gandhi’s successor, senior party leader Shashi Tharoor said on Saturday the new chief should be a person who can energise the partys organisation and inspire the voters, asserting that the Congress cannot afford “business as usual”.

“For those following the #CWC meet to decide on a new @INCIndia President: My position remains what I first articulated more than a month ago: CWC should choose an Interim President asap (as soon as possible), then resign & announce open elections for both President & CWC,” Tharoor tweeted.

The party has also been grappling with a series of desertions by leaders in Karnataka and Maharashtra, the latest being that by ex-Congress Rajya Sabha chief whip Bhubaneswar Kalita and MP Sanjay Singh. With elections in Maharashtra, Jharkhand and Haryana coming up, the party is hoping to resolve the leadership issue quickly and move forward.