Mystery shrouds the arrest of writer and journalist Doddipalya Narasimhamurthy in a 25-year-old case. The Raichur Police in Karnataka booked Narasimhamurthy on October 24 for treason among other charges including attempt to murder and extortion.

Narasimhamurthy, the secretary of Gauri Media Trust which was formed after the death of journalist Gauri Lankesh in 2017 is also the general secretary in Karnataka of Yogendra Yadav’s political outfit Swaraj India. He publishes Nyaya Patha, a Kannada weekly, in place of Gauri Lankesh’s Patrike.

He was in Raichur to talk at a seminar on ‘alternate media’ when police arrested him. The court remanded him to judicial custody till November 6.

Police allege Narasimhamurthy of having Naxal and Maoist connections and that he changed his name from Vinod to Basavaraj to Narasimhamurthy.  Raichur Superintendent of police CB Vedamurthy told reporters that Murthy was a wanted man and several arrest warrants were issued against him in the past.

But according to his friend Kumar Budarikatti, Narasimhamurthy never absconded and he was not the one police was looking for. Budarikatti said Narasimhamurthy set up a silkworm factory in his hometown, Doddipalya, in Kengeri (South Taluk) in the 90s and was involved in various social activities before jumping to journalism.

“Narasimhamurthy and his elder brother sold their family property in Doddipalya and built commercial buildings in Kengeri, Bangalore. It was during these years that they started trading in clothing and slippers. He got loans from the bank for that. All these transactions have been publicly documented,” Budarkatti writes in a detailed Facebook post.

His arrest comes at a time when another activist and reformed Naxalite Noor Sridhar, a close aide of Gauri, booked under similar charges was acquitted by the court earlier this week. 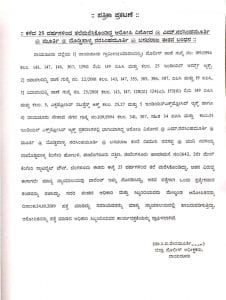 People close to Murthy talk of his active involvement in protest against Bangalore-Mysore Infrastructure Corridor where he fought for the rights of farmers and residents along the corridor. They also recount his active role in fighting against privatization of Visvesvaraya Iron and Steel Plant and Bhadravati paper mills in Shivamogga along with freedom fighter H S Doreswamy in the late 90s.

Swaraj India members called this move a political vendetta by the ruling BJP. Party president Yogendra Yadav vowed to fight against his arrest and seek bail.

“His arrest is nothing but an assault on progressive, liberal and democratic forces who openly disagree with the political ideology and practices of the ruling party,” the party officials said.

Yadav contended that the police could have arrested him before if they had evidence. But arresting him after 25 years only proves another attempt by the ruling government to silence dissenting voices.

Shringesh, editor of a vernacular newspaper called Janahorata in Shivamogga who also happens to be a journalist who worked closely with Narasimhamurthy says there is an ongoing attempt to derail the ideology that is challenging the BJP.

“In the Bheema Koregaon case, people like Sudha Bharadwaj were jailed. Now a similar case has been created and Doddipaliya Narasimhamurthy has been arrested. This is the compass for those  the movement–writers, journalists and artists…”, he adds.

Narasimhamurthy’s lawyer claim no charge sheet has been filed in the case till now. Even as activists and rationalists are startled with his arrest, over 40 different activists’ groups have joined hands to protest against his arrest. They are mobilizing support to quash all false cases against him and press for his release.

Another ‘agni pariksha’ awaits Yediyurappa – to save his CM’s ...