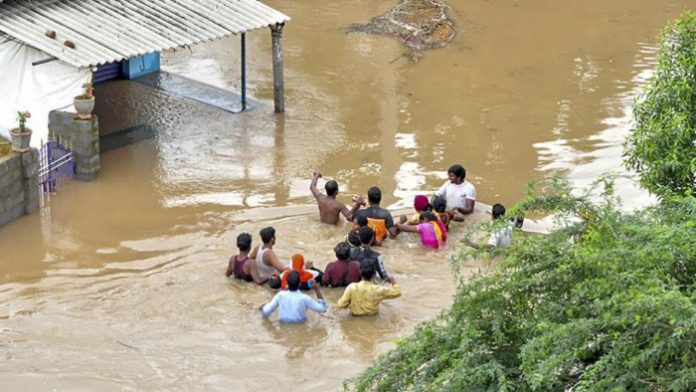 Nearly 24 lakh people have been affected by the floods. (Photo: PTI)

The rain has shown no mercy to Andhra Pradesh, which on Sunday saw trains cancelled or diverted, and main road and rail routes cut off due to the floods.

Hundreds of vehicles remained stranded while the Penna river in spate caused heavy destruction in the wake of relentless rainfall. At least 24 people have died in the state and many are reported missing in floods in the Rayalaseema region.

In the temple town of Tirupati, there was no respite for people as several residential areas remained inundated for the fourth day, and fresh fears were raised after reports of cracks developing in one of the biggest water reservoirs in the state located in the town.

In Chittoor district, a large volume of water from upstream and from Tirumala Hills led to the Swarnamukhi river going into spate, filling the reservoirs and causing flooding.

According to the South Central Railway, the trains were cancelled due to heavy inflow of water between Nellore – Padugupadu section of Vijayawada Division and Razampet-Nandalur of Guntakal Division. Hundreds of train and bus passengers were also stranded in the flood-hit Chittoor, Kadapa and Anantapur districts.

Media reports said nearly 24 lakh people have been affected by the floods, while 1,316 villages have been hit by the rains. The calamity has also damaged agriculture and horticulture crops over 6.33 lakh acres.