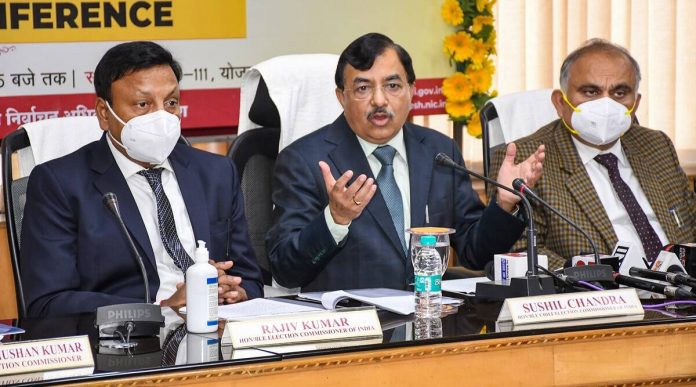 Despite the looming threat of Omicron, which is causing a huge spike in COVID-19 cases, the Election Commission has decided to go ahead with the state Assembly polls in Uttar Pradesh, Punjab, Goa, Manipur, and Uttarakhand.

Elections will be held for 403 assembly seats in UP, 117 in Punjab, 70 in Uttarakhand, 60 in Manipur and 40 in Goa, said Chief Election Commissioner Sushil Chandra.

While UP will go to polls in seven phases from February 10 to March 7, Punjab, Uttarakhand and Goa will vote in a single phase on February 14. Manipur will vote in two phases on February 27 and March 3. The counting of votes will be held on March 10, the poll body added.

For the EC, ensuring safety during COVID will be one of its main priorities, said CEC Sushil Chandra addressing the media. He stressed that there will be no physical rallies, cycle rallies, padayatras or roadshows till January 15 due to the COVID situation. The situation will be reviewed and fresh instructions will be issued later, he added.

The CEC also pointed out that the Model Code of Conduct (MCC) comes into effect immediately with the announcement of the schedules.

There will be no victory procession, only two people will be allowed to travel with the victorious candidate. The EC will also carefully watch all social media posts, said the CEC.

The EC is encouraging more virtual election campaigns this time due to the COVID situation.

Further, the CEC said that in the five assembly elections, 8.34 crore electors will be eligible to vote. The number of voters per booth has been reduced to 1,250 from 1,500. The total number of poll booths has gone up by 16 per cent and polling time has been increased in all polling booths due to the COVID situation.

More importantly, the criminal background of candidates should be published mandatorily, said CEC. Each and every voter has a right to know about the candidates and so they will have to publicise their criminal antecedents through newspapers and TV channels. It is mandatory for all political parties to upload criminal cases on their home page, and give reasons why they selected this candidate with criminal antecedents.

On Friday (January 7), the EC’s top officials met with the Health Ministry in Delhi to discuss polling amid the alarming rise in the number of COVID-19 cases, said a PTI report. On Saturday, India reported 1.41 lakh cases, which is a significant 21 per cent jump in the number of cases from the day before.  In these circumstances, it was discussed whether they should also increase the voting hours for people and to set up more booths to encourage social distancing.

Voicing its concern about the upcoming polls, the Uttarakhand High Court had asked the government if the people could vote online and if rallies could be held virtually. In any case, the state banned political rallies till January 16.

In the meeting, the necessity of all poll workers and voters to be double vaccinated was discussed. Neither the Centre or the EC were willing to take the onus of controlling the COVID situation in these poll-bound states. While the V K Paul of the country’s COVID task force said it is the responsibility of the EC to issue and monitor COVID safety guidelines during election rallies, the EC said their role only kicks in when the election dates are announced and the Model Code of Conduct comes into play.

Once the Model Code of Conduct comes into effect, the ECI’s COVID-related restrictions, first drawn up in August 2020 ahead of the Bihar Assembly elections, will also come into play. The rules include mandatory wearing of masks during the whole election process, from campaigning to casting of votes, holding rallies in identified grounds with social distancing measures in place, and reducing the number of people allowed in roadshows.

The EC however decided not to postpone the polls as suggested by the Allahabad High Court since all the political parties contesting in the UP elections requested that the elections be held with all the adequate COVID protocols in place.

In the five poll-bound states, four are ruled by the BJP. But the one that will be most crucial for the ruling party is the UP Assembly elections. Since the state sends 80 MPs to the Lok Sabha, this election is keenly viewed, as it is also seen as a barometer to measure the mood of the people towards the ruling political party at the Centre. The BJP is nervous as it faces a serious challenge from Samajwadi Party leader Akhilesh Yadav.

In Punjab, an embattled Congress will try to hang on to power despite facing a  leadership crisis because of a very public fight between Navjot Sidhu and ex-Chief Minister Amarinder Singh. After a lot of will he, won’t he, Amarinder Singh quit the post in a huff and set up his own party last year – the Punjab Lok Congress and decided to ally with the BJP.

In Goa, the BJP is battling an anti-incumbency wave. Besides having to deal with old rival Congress, the party faces challenges from the AAP and Trinamool Congress. The Congress and the AAP will be pitted against the BJP in Uttarakhand too, where the ruling party had to change chief ministers twice in less than six months.

In Manipur, the Congress which had bagged 28 seats in the 60-member Assembly the last time, could not form the government. The BJP outsmarted them by winning over three regional parties and assumed power. This time around, it remains to be seen how the ruling party will fare this time around?