Golden Kayaloram, the last of the four illegal buildings of the Maradu flats at Kochi, was razed to the ground at 2pm on Sunday (January 12), hours after the demolition of Jains Coral Cove building.

Golden Kayaloram was the smallest building of the apartment complex to be razed down, in deference to Supreme Court orders.

The demolition drive which took place in two phases saw the implosion of Alfa Serene and H2O Faith on Saturday (January 11). The implosion was carried out by Edifice Engineering with assistance from South Africa-based Jet Demolition.

According to reports, Section 144 was imposed on the exclusion zone and residents were vacated from the vicinity of the flats before the demolition on Sunday.

#WATCH Maradu flats demolition: Jain Coral Cove complex demolished through a controlled implosion.2 out of the 4 illegal apartment towers were demolished yesterday, today is the final round of the operation. #Kochi #Kerala pic.twitter.com/mebmdIm1Oa

The companies, Edifice Engineering and South Africa-based Jet Demolitions, awarded contract for demolishing filled explosives in the interconnected holes drilled into their pillars, a few weeks ago. The intermediate walls of the buildings were demolished through pre-demolition works and the apartments stood on bare structures.

According to reports, around 850 kg of explosives were used for the demolition using controlled implosion. Seconds after the explosives burst, the neighbours witnessed a thick layer of smoke from the demolition site. The debris of the demolished flats was accumulated for 4 floors height, claimed reports. 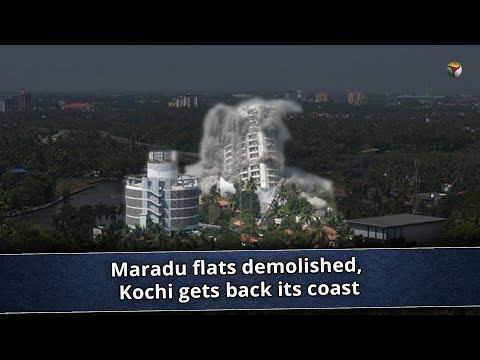 The Supreme Court had in September 2019 directed demolition of the apartment complexes within 138 days, a time line given by the Kerala government. A total of 343 waterfront flats were built in the complexes, violating the Coastal Regulation Zone norms.