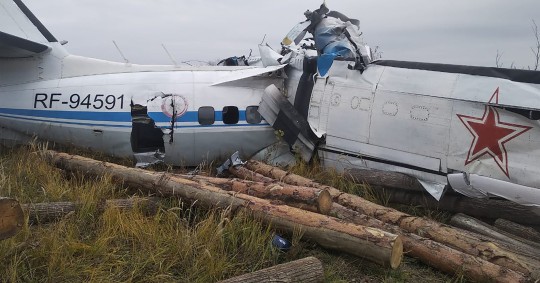 Images published by the emergencies ministry showed the aircraft broken in half with a dented nose.

An aircraft carrying parachute jumpers crashed in the Russian region of Tatarstan on Sunday, killing 16 people and injuring six.

According to Reuters, the L-410 plane came down near the city of Menzelinsky around 9.23 am local time (0623 GMT), and had been carrying 20 parachutists and two crew members. Six persons are reportedly in a serious condition in hospital.

“Six persons were rescued, 16 were taken out without signs of life,” the emergencies ministry was reported as saying.

The Turbolet twin-engine short-range transport aircraft was owned by an aeroclub in the city of Menzelinsk, the TASS news agency reported. Images published by the ministry showed the aircraft broken in half with a dented nose.

“Cosmonauts use the area for training and the aeroclub has hosted local, European and world championships,” the club’s director Ravil Nurmukhametov was quoted by TASS as saying.

The state-run Cosmonaut Training Facility has suspended its ties with the aeroclub pending an investigation, TASS cited a source as saying.

Reuters reported that the RIA agency cited local authorities as saying one of the engines could have failed. Photographs of some of the parachutists on board posing in kit or with a plane were circulated on the REN TV channel and on social media.

Tatarstan head Rustam Minnikhanov was travelling to the scene of the crash, a statement on his website said.

According to Interfax, the plane belonged to the Voluntary Society for Assistance to the Army, Aviation and Navy of Russia, which describes itself as a sports and defence organisation. The head of the organisation’s regional branch said the parachuting club that organised the flight was not to blame.

Last month, an ageing Antonov An-26 transport plane crashed in the Russian far east killing six persons. In July, all 28 people on an Antonov An-26 twin-engine turboprop died in a crash in Kamchatka.