Becoming the first member in his family to contest, Shiv Sena leader Aaditya Thackeray on Thursday (October 2) filed his nomination from the Worli Assembly constituency in Mumbai for the October 21 elections.

Accompanied by father and Sena president Uddhav Thackeray and mother Rashmi, Aaditya submitted the nomination papers to the Returning Officer.

In his election affidavit, Thackeray declared his occupation as ‘business’ and that he has immovable assets worth ₹4.67 crore. 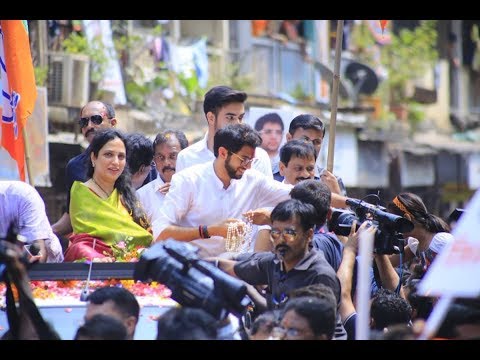 This was preceded by a massive roadshow by Shiv Sena workers. In support of Thackeray, flags of Shiv Sena allies like BJP and other NDA-ally Republican Party of India (A) were also seen during the road show.

An elated Uddhav Thackeray said he was confident of his son’s victory. “My father (Bal Thackeray) used to say that he won’t contest polls. I also say that I won’t contest elections. But this (Aaditya’s) is the new generation, which will take the state forward,” Uddhav said.

6:30 AM, 8 December, 2022 0
The three-day All India Veerashaiva-Lingayat convention is likely to raise the demand for religious status for the community as well as for its inclusion in the OBC list of the Union government

Warner hits out at CA, made Warner scapegoat ...

Luis Enrique out as Spain coach after World C...

Collegium system is law of the land: SC pulls...

AAP now a national party thanks to people of ...

4:36 PM, 8 December, 2022 0
The Aam Aadmi Party is set to become a national party and this is because of the people of Gujarat who have voted for the party in the state assembly elections, Delhi Deputy Chief Minister Manish Sisodia said on Thursday, expressing gratitude to the people.