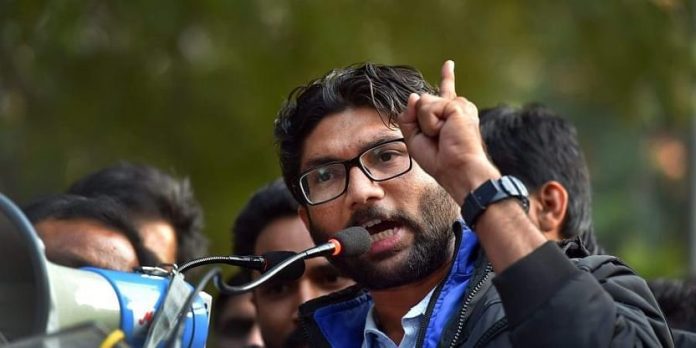 who had joined the Congress last year, further quoted lines from the Telugu blockbuster hit, 'Pushpa', saying that he would not bow down to such pressures, as he is “fire” and not a “flower”. PTI file pic

Gujarat Independent MLA Jignesh Mevani hit out at the BJP and Prime Minister Narendra Modi on Monday (May 2), accusing them of framing cases against him, as part of a “pre-planned conspiracy” to “destroy and defame” him, before the Gujarat Assembly elections.

“I call this 56-inches of cowardice, using a woman to frame me in a false case… the Prime Minister’s Office was involved in this conspiracy,” he told reporters at the Congress headquarters in New Delhi. And, added that some “Godse bhakts” sitting in the PMO were behind his arrest.

Mevani, an Independent MLA in Gujarat, was arrested last month by an Assam police team from Palanpur town in Gujarat’s Banaskantha district on April 20, after a BJP leader in Assam filed a complaint about his tweets criticising PM Modi.

On April 25, Mevani was granted bail by a Kokrajhar court, but was re-arrested in a fresh case filed in Barpeta district on the basis of a complaint by a woman police officer who accused him of “assaulting” her and “outraging her modesty”.

While granting bail, the session court judge Aparesh Chakraborty said, “Converting our hard-earned democracy into a police state is simply unthinkable. If the instant case is accepted to be true and in view of the statement of the woman recorded by the magistrate…which is not, then we will have to rewrite the criminal jurisprudence of the country.”

He was finally released from jail on Saturday (April 30), after he was granted bail on Friday.

Meanwhile, talking to the media in Delhi, the legislator, who had joined the Congress last year, further quoted lines from the Telugu blockbuster hit, Pushpa, saying that he would not bow down to such pressures, as he is “fire” and not a “flower”. He even accused the government of having “planted something” in his electronic devices, including the mobile phones and laptops seized from him and his team members.

Also read: Out on bail, Mevani says his arrest was orchestrated by PMO

Further, he argued that there were many cases such as the 22 instances of question paper leak in Gujarat; the huge drug haul at Mundra port and the rape allegation levelled against a Gujarat Minister by a Dalit woman. No probes have been ordered in any these cases and no arrests have been made. Similarly, a call for genocide of a particular community was made from a Dharam Sansad but no action was taken, he averred.

Mevani added: “My tweet was simple. I was merely asking the Prime Minister to appeal for peace and harmony. For that, they arrested me. What does it show? It was a pre-planned conspiracy to destroy me….” Further, he added that he was not given a copy of the FIR, neither were the sections slapped against him were disclosed to him and he was not allowed to talk to his lawyer.

“My privilege as an MLA was disregarded. The Speaker of the Gujarat Assembly was not informed about my arrest… Perhaps, he was informed after I was taken to Assam and once I was in their custody. This has hurt the pride of Gujarat. The Gujarat government should also be ashamed,” he pointed out.

Will eventually return to my home Barcelona, ...

K Viswanath: The filmmaker who made people ap...