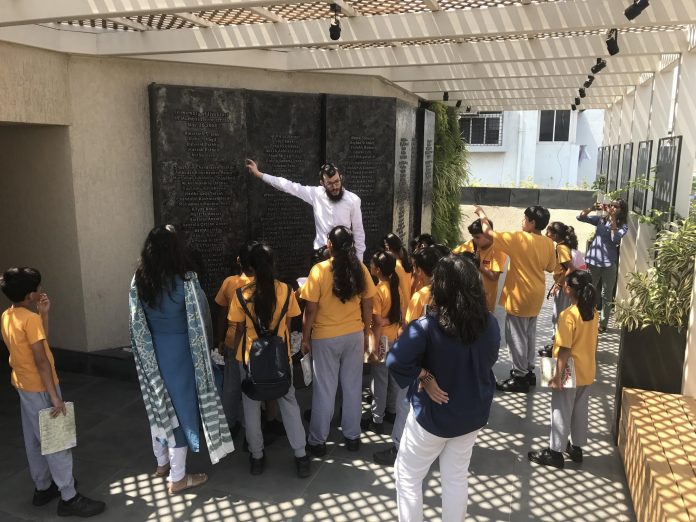 Thanks to the pandemic, what was once a vibrant hotspot for the Jewish community in Mumbai, has been stuck in limbo.

Ever since 2003, the five-storey Nariman House – also known as Chabad House – had been home to a Jewish outreach centre owned and run by the late rabbi Gavriel Holtzberg and his wife, Rivka. The structure, located in South Mumbai’s Colaba area, has been described on more than one occasion as the “epicenter of the Jewish community in the city.”  On the fateful night of November 26, 2008, two terrorists stormed and attacked the house, taking the six persons living inside hostage. By the end of the siege, all six had been killed by the terrorists, some even tortured beforehand.

An Indian commando by name Gajendra Singh Bisht, who was part of the special forces team that responded to the terrorist attack at Chabad House, also lost his life that day. Miraculously, the late rabbi’s two-year-old son, Moshe, was rescued by his nanny and kitchen cook.

In 2018, a plaque listing all 166 names of victims was placed on the rooftop to commemorate the people who had lost their lives across the city in the terrorist attacks of 2008. A year later, the administration looking after Chabad House unveiled plans to convert the place into a museum, with the theme of “from darkness to light.”

The general public had just started to trickle in, and the project was still in its initial stages and awaiting funding when the COVID-19 pandemic struck. Ever since then, what was once a vibrant hotspot for the Jewish community in Mumbai, has been stuck in limbo.

In an exclusive conversation with The Federal, current rabbi Israel Kozlovsky revealed that the stalled plan of the museum will be taken up once more in the upcoming months. The museum is also expected to throw open its doors to the general public for the first time in two years, while patiently waiting for funding to trickle in.

“Visitors had started coming in pre-COVID,” says Kozlovsky, adding that Chabad House, at the time, was still conducting various community engagement activities as well as museum tours for the general public. The museum primarily comprises the rooftop and the fifth and fourth floors. “But once the pandemic started, we had to close the place down. We haven’t yet got to resume operations… but we are hoping to do so within the next month or two.”

“A big part of the museum was not made due to the sudden onset of the pandemic in India,” he said. “But we have received a donation recently that will help us with our next phase. We need to raise a total of $2 million in funding but have only managed a couple of hundred thousand so far. Once the place reopens, and the doors of the museum are thrown open, word will hopefully spread and help us in getting more funding.”

According to Kozlovsky, they too had to adapt to the pandemic, much like the rest of the world. “We also experienced a very harsh monsoon due to which some more repair work needs to be done. This week, we are having a detailed survey of the place, and we will see what all efforts we can put in to open it up once again to the public. Hopefully, we will finish everything within the next two months,” he adds.

Kozlovsky says that the plaque on the rooftop, engraved with the names of the victims of the 26/11 terror attacks, is a “one-of-a-kind place in the city”.

Like any other charitable organisation, Chabad house too experienced a problem with receiving funding for its museum over the last two years, ever since the pandemic set in.

“Somehow, we have survived,” he says. “The recent donation that we have received towards the museum will help in restarting operations once again – but we still need a good amount to see the plan through successfully. We believe in breaking the pie into many different pieces… and are looking for more funding to trickle in as and when word spreads about the museum resuming its functions. Once everything comes back to life, Chabad House will once again generate attention which will, in turn, lead to more funding.”

Leorith Elijah, who was (and still is) closely working with the rabbi on the museum project, says: “A tour of the museum will comprise primarily of the rooftop, where the commandos had landed, as well as the fifth and fourth floors. The tour will start from the rooftop… but the fourth and fifth floors are where work is still pending, primarily due to a shortage of funds. This is also the floor where baby Moshe was sleeping when the attack took place. Even today, one can see some paintings on the wall, of Hebrew alphabets… we are going to retain these as part of the museum. The fourth floor is where the actual attack took place. It was serving as a guesthouse at the time and there were foreign nationals from Israel and America living there, who were eventually gunned down. Even today, one can see the bullet marks and the impact of the grenade on the walls…”

According to Elijah, the primary function of the fifth floor would be to provide the public with a glimpse of Jewish lifestyle. “There is a Hannukah stand here located on this floor, where candles are lit every year. It also houses the kitchen which follows the Jewish culture of kosher eating habits. People, while on the museum tour, will get to know more about Jewish culture – this is the basic idea.”

She adds: “For the last two years, the fourth and fifth floors have been shut for the public. But for the Jewish community, activities are still going on. We run a small school, people come and visit us for prayers, and community activities still take place. But they are on a much smaller scale.”

When asked about the sudden vacuum that Chabad House found itself in when the pandemic kicked in two years ago, Elijah says that the first idea was to meet with corporates and donors and raise funds from the global Jewish community.

“We were looking at a mix of people within the country who would support this project,” she says. “We decided to open the place as it is for the general public. Let the word start spreading. We started planning two months prior to the 11th anniversary of 26/11 (in 2019) since it was a good time keeping in mind the chatter that always prevails in the prelude to the anniversary. We opened the museum with ritual candle-lighting and some poetry narration. People started visiting and we began our talks with potential donors. Word was spreading and they were interested. Unfortunately, after the pandemic began… it went on for too long and it has taken us two whole years to think about whether we should reopen the place.”

When asked what would it take for Chabad House to return to its pre-COVID glory, Elijah laughs meekly and says: “I wish I had an answer to that. We are trying different ways in which we can spread the word and how we can share Chabad House’s story with everyone. The main goal of the museum is to enable people to see what happened in the past, come face-to-face with those disconcerting details, not carry pain with them, but with a sense of social responsibility to engage in acts which are in stark contrast to what instigated the attacks.”