Eighteen people were killed and scores injured when an Air India Express flight from Dubai with 190 on board overshot the tabletop runway in Kozhikode airport in Kerala on Friday night while landing in heavy rains and fell into a valley 35 feet below and broke into two portions, officials said.

The pilot-in-command Captain Deepak Sathe and his co-pilot Akhilesh Kumar were among those who died, police and airline officials said. Sathe was a former Wing Commander of the Indian Air Force (IAF) and had served at the forces flight testing establishment.

“Unfortunately the pilots have passed away and we are in touch with their families in grief,” said an Air India Express statement past midnight.

The Civil Aviation Ministry said the Boeing 737 aircraft on a flight from Dubai to Kozhikode overshot the runway at Kozhikode airport at 7.41 PM on Friday. “No fire was reported at the time of landing,” it said.

There were 184 passengers including 10 infants, two pilots and four cabin crew on board the aircraft, the ministry added. It was a repatriation flight operated by the Centre under the Vande Bharat mission to bring home Indian nationals hit by international travel restrictions due to the spread of COVID-19. 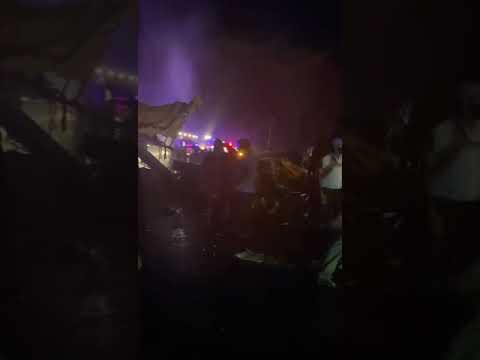 “Air india Express AXB1344, B737 Dubai to Calicut, person on board 191, visibility 2000 meter, heavy rain, after landing Runway 10, continue running to end of runway and fall down in the valley and broke down in two pieces,” the Directorate General of Civil Aviation (DGCA) said in a statement. “Teams of National Disaster Response Force (NDRF) are being rushed to Karipur Airport where the Dubai-Kozhikode flight skidded off the runway, for search and rescue,” said NDRF Director General SN Pradhan.

“We must remember that it is a tabletop runway at Kozhikode. There seems to have been injuries among all the passengers and some of them are unconscious. An NDRF team has been rushed to the spot and should be reaching any time there to join search and rescue operation,” said Pradhan. Kerala Chief Minister Pinarayi Vijayan asked all government agencies to engage in rescue operations using all government facilities. He has deputed AC Moideen, minister for local bodies, to coordinate the rescue operations. Moideen has left for Karipur from Thrissur. Health authorities have been instructed to provide all possible medical aid to the victims.

Have instructed Police and Fire Force to take urgent action in the wake of the plane crash at the Kozhikode International airport (CCJ) in Karipur. Have also directed the officials to make necessary arrangements for rescue and medical support.

“Have instructed Police and Fire Force to take urgent action in the wake of the plane crash at the Kozhikode International airport (CCJ) in Karipur. Have also directed the officials to make necessary arrangements for rescue and medical support,” Vijayan said in a tweet. Meanwhile, the authorities have rescued a child from the crash site and have asked anyone with any information on the child to contact the police. She is with the police now.

The Collector said the sub-collector and a deputy collector are coordinating rescue efforts. He said the people should act only on ‘reliable and official information.’ The collector urged the public to desist from acting on ‘false information transmitted on social media platforms.’ The state government has reportedly asked an Inspector-General of Police to be on the spot and supervise the operations.

Pained by the plane accident in Kozhikode. My thoughts are with those who lost their loved ones. May the injured recover at the earliest. Spoke to Kerala CM @vijayanpinarayi Ji regarding the situation. Authorities are at the spot, providing all assistance to the affected.

“Pained by the plane accident in Kozhikode. My thoughts are with those who lost their loved ones. May the injured recover at the earliest. Spoke to Kerala CM Pinarayi Vijayan ji regarding the situation. Authorities are at the spot, providing all assistance to the affected,” said Prime Minister Narendra Modi in a tweet.

The Karipur airport is a tabletop runway facility which is deemed relatively dangerous for landing aircraft. An ill-fated Air India aircraft skidded off the runway while landing at the Mengaluru airport, another tabletop runway site, killing 158 passengers on May 22, 2010. The flight, which overshot the runway, hit a sand bar first and then a concrete tower before falling off the tabletop and catching fire.

In India, Karipur in Kerala, Mengaluru in Karnataka, and Lengpui in Mizoram are tabletop runways.

The DGCA had raised safety concerns about the Karipur airport in July and flagged issues like ‘excessive rubber deposits,’ cracks and stagnating water on parts of the runway.
These issues are said to be dangerous for landings, especially when Kerala is witnessing heavy rainfall, since these factors reduce friction during landings. The aviation regulator had given 15 days to the Airports Authority of India (AAI) to respond to the audit.

An AAI spokesman told Times of India said runway friction was being maintained at a higher value, as per the DGCA requirement. “We have procured exclusive rubber deposit removal vehicles costing 5.5 crores,” the TOI quoted the official as saying.