As part of our series on three decades of reforms, we look at how two cheap models in two distinct eras were perceived in radically different ways by the middle class. One of them was a roaring success, the other a sputtering failure, both metaphors for different implications for social status and self-esteem in an evolving society. 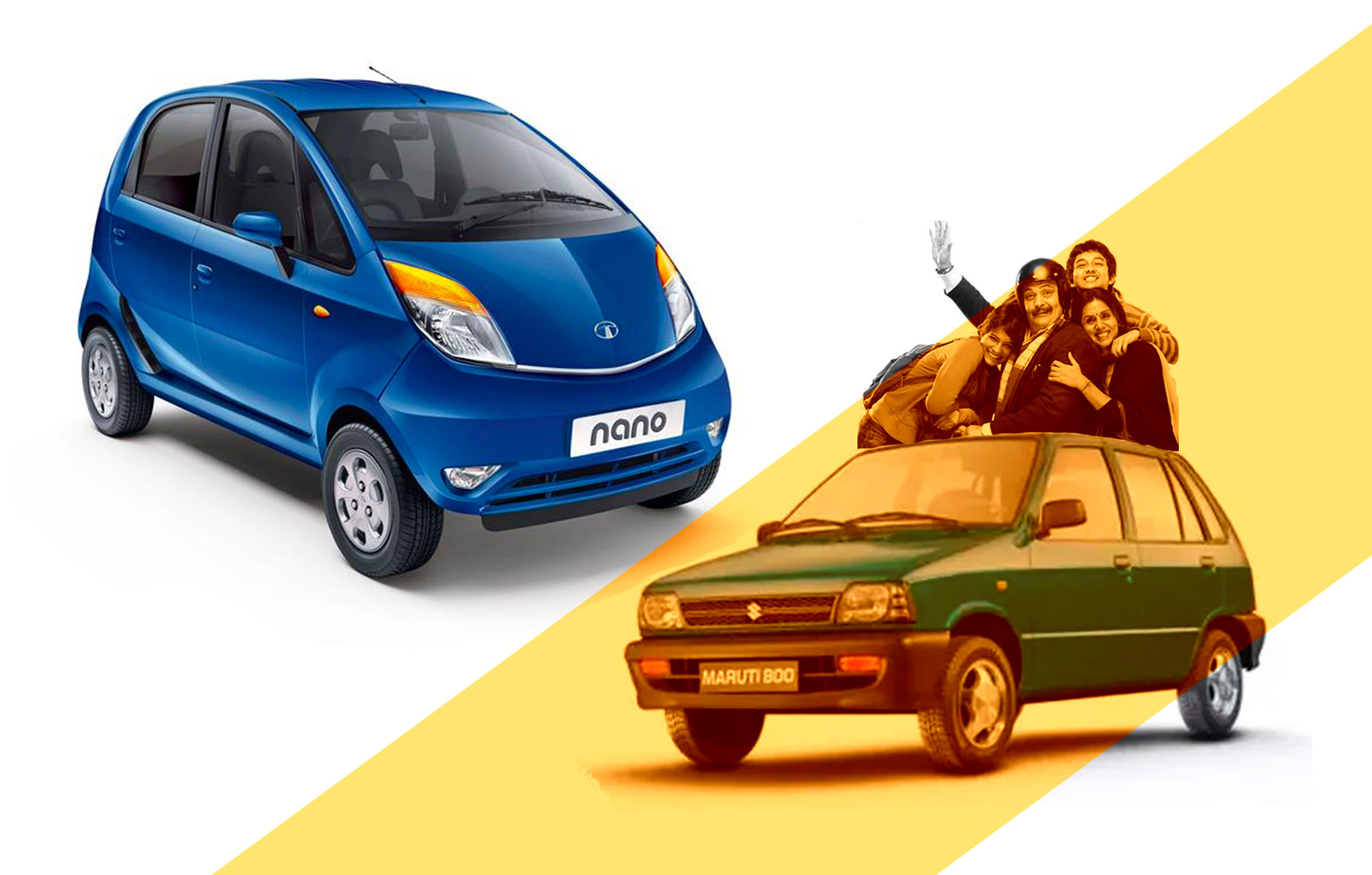 Remember that small, sleek, and shiny Maruti 800 car from the 1980s that ruled the roads for decades. When it was phased out in 2014, it had sold millions. Those who possessed it were obsessed by it. It became the -fancied middle-class icon, a revered o bject. People waited for years to buy it, and some paid huge premiums to do so. Bridegrooms demanded it in illegal dowries, which were banned in 1961. To borrow from a famous ad-line, it was “neighbor’s envy, owner’s pride”.

Within years, the 800 became a sign of social status. A 2008 article said that it emerged as the fourth addition to the “Great Indian Middle Class dream” of Roti, Kapada, Makaan, aur Meri Maruti (food, clothes, house, and My Maruti). Kenneth Bo Nielsen and Harold Wilhite of the University of Bergen (Norway) wrote that “popular representations” and “symbolic imaginaries” were attached to the model. The 800 could zip and zap, sway and swerve, and zigzag through traffic.

Shockingly, the car should have been the last thing to signify personal and social esteem. It was the ultimate sign of corruption, a product of political nepotism at the very top. It was the pet project of Sanjay Gandhi, the younger son of the then Prime Minister, Indira Gandhi. Scandals and scams engulfed it. Politicians, chief ministers, official bankers, and businesspersons crawled in front of Sanjay Gandhi, and went out of their ways to help the second son of the ‘First Family’.

Only after Sanjay’s death in a plane crash did the Maruti project get back on the tracks. The government collaborated with Japan’s Suzuki Motor. The first vehicle rolled out in December 1983, and its keys were handed over by an emotional mother, Indira Gandhi, to the proud owner, Harpal Singh. The subsequent premium image entrusted upon the 800 by the middle class was unbelievable – after all, it was a cheap (one of the cheapest in the world), and a mass-rather-than-class car.

In 2008, when the Tata-Nano was launched, it was billed as the cheapest car in the world, a model that would put millions of Indians on four wheels. In fact, it seemed to be the perfect product to take the middle class for a long ride. Unlike the scandalous past of Maruti, the Nano was pushed by Ratan Tata, one of the renowned businessmen in the world. As Nielsen and Wilhite put it, the car was the result of a “triumph of the determined, individual entrepreneurial spirit”.

An assertive and innovative nation, which had grown in confidence and abilities in the post-reforms period, had proved to the world that the impossible was indeed possible. The Nano was “imbued with emancipatory qualities”; it democratized mobility, and led to physical and social freedom for millions. It became part of a national, patriotic fervor, which linked with personal liberties. As a researcher said, it emerged as a “phantasmagoria of middle-class consumption”.

Yet, astoundingly, the Nano flopped, after the initial semi-success. The middle class, and the lower ‘aspiration’ one, rejected it vehemently. The dream-come-true turned into a nightmare. This was evident when the world’s cheapest car was advertised in an avatar that symbolized it as the world’s most expensive one. In 2011, a “special and one-off version”, Tata Nano Goldplus, went on a six-month tour across the country. The event was described by a researcher as “Auto-Orientalism”.

At a cost of $ 4.5 million, the vehicle was covered with 80 kg of gold and 15 kg of silver, and studded with 10,000 semi-precious stones and gems. A jewel-encrusted peacock, the national bird, sat on the front bumper, and the car celebrated 5,000 years of Indian jewellery and diverse craftsmanship from various regions. It was talked about as the mix of tradition and modernity, a balance between art and technology. It failed to capture the imagination of the middle class.

Why did the middle class view two similar products in a radical manner? The quick answer: they had different implications for social status and self-esteem. A generation of people like Harpal Singh, the first owner of the 800, was besotted with the car because it appealed to the middle class of the pre-reforms era. The values of these people were not the same as those of the generations in the post-1991 period. The two sets had dissimilar ideas about social and personal expressions.

In the 1980s, consumers were bereft of choices, especially foreign brands, because of the Licence-Permit-Quota Raj and import restrictions. In addition, they sought less-expensive value-for-money options as salaries were low, loan avenues were minimal, and one had to save to pay the entire money in cash. They were starved for modern technology, and sick of products that used decades-old know-how. In all these respects, the 800 scored higher points than its competitors.

At a price tag of Rs 50,000, Maruti was cheaper than the Ambassador and Fiat. The former used the latest Japanese technology, and had better pick-up, acceleration, and maneuverability. The Ambassador was based on an engine that was made decades ago, and remained unchanged. Given the still limited alternative between two old models and a new one the middle class overwhelming and logically went in for the latter. The 800 was young, hip, and cool – and affordable.

Tata Nano was cheaper – its price of Rs 100,000 was possibly less than Rs 50,000 in terms of purchasing power in 2008. However, its indigenous technology, though innovative, did not appeal to the buyers. One could choose from a plethora of foreign models, as almost all the global car-makers had their presence in India. The price was not a concern, given the loan options and easy EMIs. One could easily buy a more expensive model as her entry-level car.

While Maruti’s performance was way better than the Ambassador, the customers did not feel the same about the Nano. Unfortunately, the people perceived the Nano’s label as the world’s cheapest car as a “stigma”. As Hormazd Sorabjee of Autocar magazine said, it seemed “as though you can’t afford anything else”. The two-wheeler owners, who wished to graduate to a four-wheeler, thought Nano was something less than a car. A car owner saw it only as a replacement for a two-wheeler.

Existing social power structures played a role in two ways in the success of 800 and failure of Nano. Several studies concluded that although a class may generally behave as a whole, there is invariably a dominant faction within it that exerts a greater influence on the others. This is true of the Indian middle class, and the influential minority defines the “standards against which the aspirations of the other factions of the same class and within the same landscape are measured”.

Maruti gained from such social dynamics, and Nano didn’t. The 800 gained ascendancy as it became the tool for a revolt against prevailing socialist-nationalist ideals. The Ambassador was the product of protectionist policies, and used by politicians, civil servants and businessmen, who had vested interest in the fractured system. Maruti was an escape from those clutches. Nano’s neo-Swadeshi-nationalist atmospherics failed to make any headway among the buyers.