On Sunday, March 21, a pastoral – an open letter addressed by a bishop to the clergy or laity, or to both – was read out in churches under the Roman Catholic Diocese of Quilon. Around two-and-a-half lakh families come under the Kollam diocese, the first Catholic diocese in the country. The letter, written by Bishop Dr Paul Antony Mullassery, accused the LDF government of trying to destroy the livelihood of fishermen and selling out the fisheries sector to big businesses. It criticised the government over a decision, now abandoned, to allow an American company to conduct fishing in deep seas off the coast of Kerala and carry out onshore fish processing operations; and for introducing the Kerala Fish Auctioning Marketing and Quality Control Bill during the pandemic, without consulting any stakeholders.

Although the bishop also had some harsh words about the central government, it was his criticism of the state government that caused a stir in poll-bound Kerala.

Sure enough, the government promptly launched a counteroffensive. It defended the new legislation – it said the law will stop exploitation, ensure fair price to workers and assure quality of fish. The government, however, did not stop there. It criticised the Church itself, accusing it of working with the opposition. Chief Minister Pinarayi Vijayan went so far as to say that Christians will have reason to doubt the sanctity of all pastorals in future.

Father Antony, the secretary of the pastoral council, was still visibly disturbed when The Federal met him at the Holy Family Roman Catholic Church, in Kollam, a few days later. He was angry about the accusations, and blamed left-wing workers for online attacks against the local church authorities.

“How can we trust this government?” Fr Antony said, referring to the MoU between Kerala Inland Navigation Corporation and EMCC International for the latter to invest ₹5,300 crore for research and development to promote deep sea fishing in the state.

The CM cancelled the MoU after the Leader of the Opposition, the Congress’ Ramesh Chennithala, denounced it at a press conference last month. “It was withdrawn only because it was exposed. What if they bring it back once they are voted back?” Fr Antony asked.

Fr Antony insisted that the Church was right in speaking for the rights of the fishing community.

The Kollam diocese’s stand, however, has made other dioceses uncomfortable, who would rather stay away from overtly political matters. “We do not want to politicise these issues,” Father James Kulas, the coordinator of the Kerala Latin Catholic Council – a body of 12 Latin diocese in the state – told The Federal. “We also have grievances, but we do not want those grievances to be used in the election.” 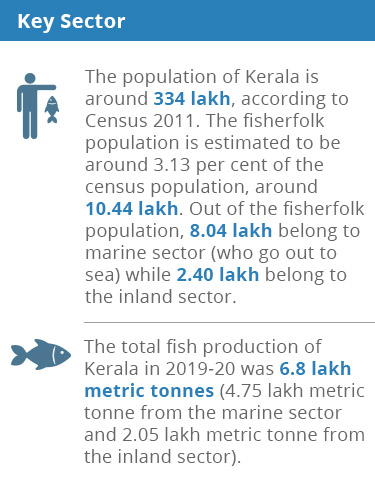 Kerala’s fishing community occupies an important space in electoral politics. The state has 222 fishing villages dotted along the length of its 589.5-kilometre coastline.

The fisherfolk are not a homogeneous group; they don’t vote for one party en masse; their choices vary – according to caste, and cultural, geographical and political affiliations. But many of them – like the farmers who work someone else’s land – work for big boat owners, who are against the steep increase in licence fee and fines stipulated in the new Act.

“The annual licence fee for boats less than 20 metres in length and with 250hp engines has been revised to Rs50,000, from Rs5,000. Fines for violating fishing norms have risen three-, fourfold, to around Rs2 lakh. This is unacceptable,” said Peter Mathias, president, All Kerala Fishing Boat Operators’ Association, a 4,000-strong body.

Mercykutty Amma, who as fisheries minister bears the brunt of the criticism, is unmoved. “Only owners of big boats and trawlers will have to pay,” she told The Federal. “The rules will put an end to exploitation by middlemen. Ordinary fishermen will not be affected.”

Mercykutty Amma represents Kundara constituency in Kollam and is again contesting from here. She told The Federal that the church, along with the opposition and boat owners and middlemen, were waging a “false campaign” against the government.

The LDF enjoys complete dominance in Kollam. It won all 11 constituencies in the district in 2016 and did well in last year’s municipal elections. The fishing community constitutes the majority of the population in at least five constituencies: Eravipuram, Kollam, Karunagappalli, Chavara and Kundara. Kundara, the constituency represented by the fisheries minister, has a substantial population of cashew workers and inland fishermen. (The fisheries sector accommodates 3.13 per cent of the total population of Kerala. Most of them are in the marine sector, meaning they venture out to the sea. Others work inland, fishing in rivers and lakes.) Thiruvananthapuram, which is adjacent to Kollam, also has a sizeable population of fishermen across four constituencies: Vizhinjam, Kovalam, Thiruvananthapuram and Nemom. The LDF holds 10 out of 14 seats in the district. The BJP holds Nemom, its lone seat in Kerala.

Christian fisherfolk in Kerala, concentrated in southern and central parts of the state, belong to the Catholic community. The Church is the main institution around which the community is organised. Historically the institution has not only looked after the laity’s religious wellbeing, but also their socioeconomic concerns. It remains to be seen, however, what effect the bishop’s pronouncements will have on the election.

The Federal spoke to several fishermen in the southern districts of Kollam and Thiruvananthapuram, who cautiously welcomed the new law.

M Joseph, a fisherman in Thankassery Harbour, praised the legislation. “Raising fines for catching certain species in breeding season is perfectly fine as far as we are concerned,” he said. “Small-scale fishermen don’t do these things, only the big players with mechanised trawlers. We all think that the government should raise the fines further.”

Joseph was among those who came to the rescue of Malayalis during the catastrophic ‘flood of the century’ that hit Kerala in 2018. He received an award from the government for his selfless work saving lives. Chief Minister Pinarayi Vijayan called the fishermen “Kerala’s own army”.

Joseph’s friends shared his views, but they were pessimistic about the future.

“It does not matter who wins. Our plight will not improve,” said Sebastian, who also received an award for his rescue work during the floods. “It was an honour to be called ‘Kerala’s own army’, but that does not make our lives any better.”

In the past few years a series of extreme weather events – cyclones, floods – have hit Kerala, and communities across the coastal belt have been badly affected.

The fishermen The Federal spoke to admitted that the government had stepped up to the task and provided much-needed assistance.

“People were paid compensation, those who lost homes were given houses or flats under the LIFE Mission,” said Pani Adima John, the councillor representing Kottappuram ward in Vizhinjam, in Thiruvananthapuram Corporation. John was referring to the government’s Livelihood Inclusion and Financial Empowerment scheme, which provides financial assistance and housing options to people from economically weaker sections and low-income groups. An independent, John refuses to join either of the two major parties in Kerala. However, he acknowledges that the LDF government has handled recent crises deftly – a sentiment echoed by the fishermen we spoke to.

Joseph and Sebastian both received Rs10 lakh compensation in the aftermath of the cyclone. “We also received food kits and welfare cheques without fail,” Joseph said.

How Himanta Sarma convinced BJP leaders he should be next CM of Assa...