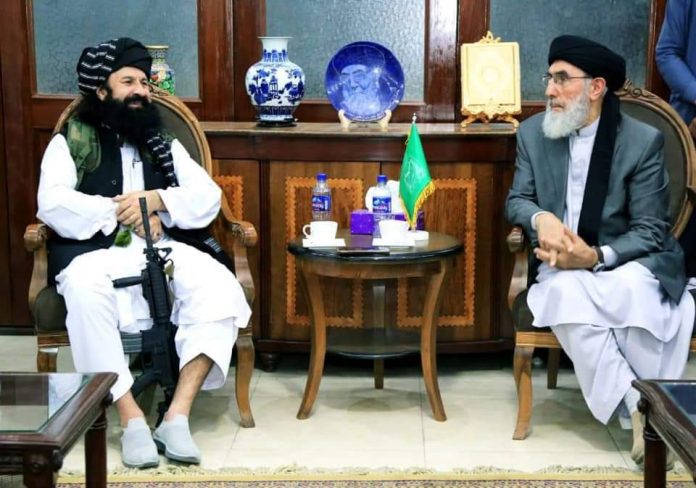 Khalil Haqqani (left) is seen with mujahideen leader Gulbudin Hekmatyar. Khalil has a $5 million reward after the US designated him a terrorist 10 years ago | Photo: Twitter

The US, caught in the maelstrom of its “conquest” in the war against terror post 9/11, faces a dilemma after its 20-year engagement in Afghanistan. The state department now says the Taliban – which the US ousted, and which has now militarily usurped power in Afghanistan – and the dreaded Haqqani Network – which Washington describes as a terrorist group – are two separate entities.

However, facts, put together by US intelligence, speak of close ties between the Taliban and the Haqqani Network. The US’s National Counterterrorism Center (NCTC) says the Haqqani Network “is considered the most lethal and sophisticated terror group targeting US, Coalition, and Afghan forces”.

It said the Haqqani Network was considered a terrorist group “because of its involvement in the Afghan insurgency, attacks on US military and civilian personnel and Western interests in Afghanistan, and because of its ties to the Taliban and Al Qaeda”.

The NCTC is aligned under the Office of the Director of National Intelligence (ODNI). The NCTC Director (D/NCTC) is appointed by the US President and confirmed by the Senate.

At a US State Department presser, spokesperson Ned Price was asked about sharing information regarding the security of Kabul airport with the Taliban and whether it was extended to Haqqani Network. Price replied: “The Taliban and Haqqani Network are two separate entities.”

The US first designated the Haqqani Network as a terrorist organisation in 2012.

A Pakistani protege, Khalil Haqqani, who has a $ 5 million reward after the US designated him a terrorist 10 years ago, is a regular visitor to Rawalpindi headquarters of Pakistan Army. The New York Times reported that he is one of the new rulers of Afghanistan.

The American intelligence believes that Khalil Haqqani is the Taliban emissary to Al Qaeda. He was seen in Kabul last week as their new chief of security, and was surrounded by men armed with American-made M4 rifles and dressed in American combat gear.

Douglas London, a former CIA counter-terrorism chief for South and Southwest Asia, has said the nexus between the Pakistanis and the Haqqani Network is “indisputable and indispensable to the Taliban takeover.”

The Taliban, Haqqani Network, and Al Qaeda are deeply interlinked in Afghanistan, with the Taliban assimilating Haqqani Network leaders and terrorists with Al Qaeda links into its command structure.

The splinter group of ISIS, the IS-Khorasan or ISIS-K who had claimed Kabul airport blast, has long clashed with the Taliban and Al Qaeda in Afghanistan, claiming Taliban rule is illegitimate.