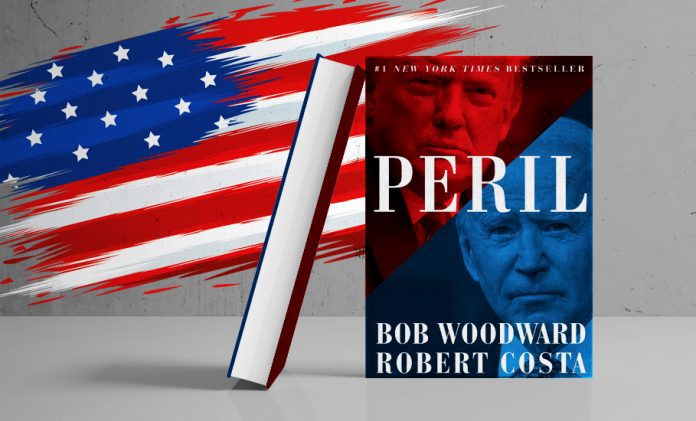 Bob Woodward of The Washington Post has done it again! His 21st book, Peril, may not be on the same plank as that of his first, All the President’s Men, that he co-authored with Carl Bernstein, but the two works reflect two different eras and most importantly two different men as Presidents of the United States — Donald Trump and Richard Nixon. Along with his colleague Robert Costa, a national reporter of high repute, Woodward has once again shown the journalists’ fraternity and readers at large what the profession is all about—the ability to tell a story in a way that a common person understands, even if that person does not necessarily agree or be appreciative of the content.

Four years of President Trump may not have exactly been a time of paradise for those around him, but certainly it has provided a wealth of information to all those writers and scholars on every aspect of governance and government or the lack thereof. The Trump administration has been characterized in many different ways—from the sycophants who believed that the 45th President was the best thing that happened after a slice of bread to those who thought that Trump was the singular leader of “nutty” people who not only brought America dangerously close to a nuclear showdown but also rattled the very roots of democracy that would have put banana republics to shame.

The strength of Peril lies in the uncanny ability of the two reporters to get behind the lines and offer perspective to the goings on and weaving together what would seem disparate sequence of events to the common person. In one way, it seems the hero is neither Trump nor Biden but Gen Mark Milley, the Chairman of the Joint Chiefs of Staff, who took upon himself to assure his counterpart in China that the United States was not falling apart with a distracted and furious President (Trump) having his fingers on the nuclear button. Subsequently, President Trump accused the General of treason but nothing to show that the top military man lost any sleep on this account.

Gen. Milley not only asked his admirals and generals to slow down any escalated exercises near China, but issued instructions that any military orders from Trump should not be carried out without proper consultation. If the top military officer took this step, it was on account of his conviction that the President was ‘mentally unstable’, a point of view he put across to the Speaker of the House of Representatives, Nancy Pelosi, in a telephone conversation. Pelosi concurred.

Flashback 1974… in the last days of the Richard Nixon presidency, senior aides were worried and even terrified that a ‘mentally disturbed’, and perhaps even ‘unstable’, President could resort to extreme measures, including committing suicide. The then defence secretary gave orders to the military commanders not to proceed with any instructions from Nixon. His hands on a bottle of scotch and with low tolerance for alcohol, Nixon in his last days was reportedly seen talking to pictures and portraits in the White House; at one time, on his knees, pounding the carpet and asking where things went wrong. Trump, who is a teetotaler, had only one obsession: himself. Naturally, he surrounded himself with only those who had use for his ideas and those who marvelled at spinning his lunatic theories and beyond.

Gen. Milley was miffed with Trump, say the authors of the book, because at a time when the country was literally burning in the aftermath of the brutal gunning down of 46-year-old George Floyd by a white police officer, Trump called for senior officials of his administration for a meeting at the White House only to have them—including Gen. Milley in camoflouges—march across the street to St. John’s Episcopal Church in Lafayette Park for a political show.

For a revolving door presidency where even senior staffers were unsure of their tenures on a daily basis, what appalled many like Gen. Milley was the ignorance of the President on the use of armed forces to quell essentially street riots— that somehow the 82nd Airborne Division out of Fort Bragg North Carolina could be used as a show of force against protestors in Washington DC!

The November 20 presidential elections and its aftermath is something that is covered in detail by Woodward and Costa for it had all the seeds of ‘peril’ in a democracy; the scandalous fashion in which Trump and his handful of advisors would plot to throw out a lawfully determined outcome, even if all courts had tossed the lawsuits and some of them derisively. The entire transition period, which culminated in the January 6 violence on Capitol Hill, unsettled even the most sober minds. “We’ve got a plane with four engines and three of them are out. We’ve got no landing gear. But we’re going to land this plane and we’re going to land it safely,” Gen. Milley is reported to have told the Secretary of State, Mike Pompeo.

Peril is also about well meaning politicians in the Republican Party like Vice-President Mike Pence, who took a lot of abuse from Trump but stayed put in their conviction that the bottomline was not personality or ideology, but the Constitution. Till the very end, Pence, in the face of abuse and death threats, firmly told his President that it was not his job to discard the electoral college vote and rig the system with state ballots so that Trump can stay on. The deeply religious Pence stayed with his convictions and advice from friends like former Vice-President Dan Quayle— to stick to what the Book (constitution) says, not blindsided by Trump or those of his ilk like Rudy Giuliani, Sidney Powell or John Eastman.

The only thing about Peril that would seem unnecessary is the discourse on President Joseph Biden, his transition, the incoming administration’s first battles and challenges by way of the domestic agenda and Afghanistan. Woodward and Costa could have kept it for another day. For, the Biden Chapter has just started. In confining themselves to the nuances of the continued Trumpism and in its implications for 2022 and 2024, the writers could have shed more light on the continued peril the country faces thanks to one man, Trump, who still thinks he won the presidency twice and his ardent followers who are convinced that he could do it for the third time!

But what is bothersome is not if the 45th President tries his hand in a legal fashion in 2024, but in the manifestations of his minions and himself in circumventing laws and values that Americans have cherished for the last 245 years. Woodward and Costa point to numerous instances when ardent critics of President Biden and the Democratic Party, like Senators Lindsey Graham and Mitch McConnell, tried to reason with Trump, but in vain. Even his close associates like Attorney General William Barr fell out of favor when refusing to endorse the preposterous theory of “massive voter fraud”. The frightening part is that the former President still has a huge following that includes a motley collection of extremists that American officials would portray as terrorists.

In 2017, the former Secretary of State Rex Tillerson made headlines when it was reported that he had called President Trump a “moron”; Tillerson refused to deny and the State Department insisted “that type of language to speak of the President of the United States” was not used. According to Woodward and Costa, Senator McConnell loved to joke with his Republican colleagues about this comment. “Do you know why Tillerson was able to say he didn’t call the President a ‘moron’?…Because he called him a ‘f*****g moron’”.

(The writer was a former senior journalist in Washington DC for about 15 years, covering North America and the United Nations).