If the killing of George Floyd in Minneapolis had created a national outrage in the US, the reverberations of that tragedy have been felt across the Western world, in unexpected ways, that have shocked the ruling elites and triggered calls for national introspection by many colonial powers.

The protests, this time not restricted only to the black population, have been massive and threw the COVID-induced social distancing norms to the winds. Thousands marched in London and other cities, defying government advice against gatherings of more than six people, in solidarity with the Black Lives Matter (BLM) movement, calling for an end to racism.

A dramatic poster moment to the protests was provided in the port city of Bristol in south-west England on June 7 when protesters pulled down the bronze statue of British slave-trader and philanthropist, Edward Colston, and threw it in the Bristol port. Before it was toppled into the river, a protester kneeled down on the neck of the fallen statue, in a grim reminder of the fate that befell George Floyd.

In London, yet another national icon was targeted—wartime Prime Minister Sir Winston Churchill’s statue that stands brooding across the Houses of Parliament was sprayed with graffiti proclaiming “(he) was a racist”. Protesters also tried to burn a UK national flag near the Cenotaph (War Monument) in London provoking police to make a number of arrests.

Following protests, the statue of Robert Milligan, an 18th-century slave owner, was removed in the Tower Hamlets borough in east London by the Canal and River Trust, which owns the land.

Calls are also growing for the removal of statues of ‘Clive of India’ (Robert Clive, the first governor of East India Company) and a host of other historic figures, including two-time British Prime Minister Robert Peel and Scouts movement founder Lord Baden Powell in Poole.

Oxford University, the revered higher educational institution that has statues and monuments littered all around its colleges and the city, was again the focus of protesters. A four-year-old controversy over the statue of Cecil Rhodes in the Oriel College of the Oxford University came back to life, with protesters calling the college to remove the statue of its benefactor, a British-born South African colonialist. The college said it is open to further discussions on the legacy of Rhodes.

A website, toppletheracists.org, has sprung up, listing a user-provided infographic of controversial statues and monuments, calling for their removal or renaming. The website, at the time of writing this article, had over 75 statues in its list, including names like William Gladstone, Sir Francis Drake, John Hawkins, Sir Thomas Guy — the list is likely to grow. 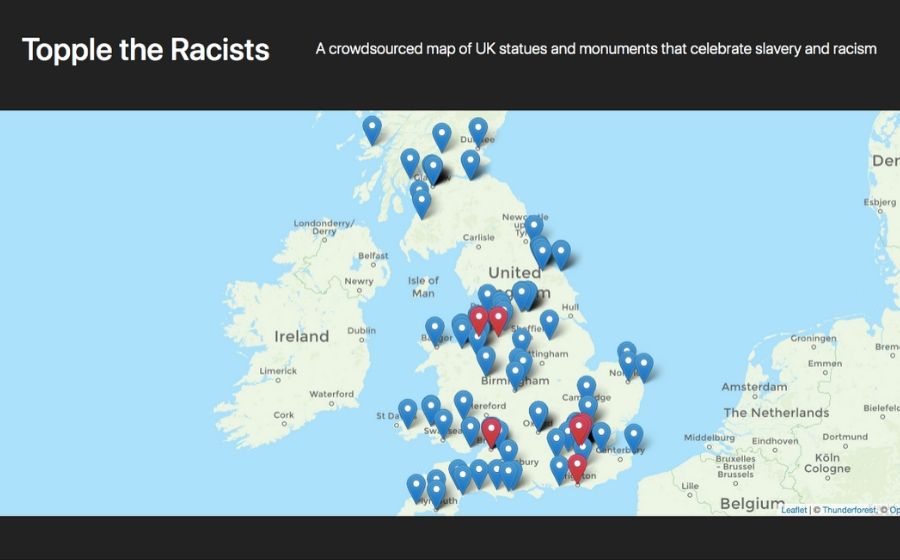 Worried about protestors vandalising statues and monuments, London Mayor Sadiq Khan ordered the covering up of the statue of Winston Churchill (with plywood) and the Cenotaph. With London cityscape dotted by many such statues and monuments, Sadiq Khan announced the setting up of a commission to look into the suitability of the monuments and statues in the city — The Commission for Diversity in the Public Realm.

Prime Minister Boris Johnson, himself an admirer of Churchill and author of a biography of the late leader, condemned the vandalising of the statue and, without naming Sadiq Khan, condemned his move: “We cannot try to edit or censor our past,” he tweeted, adding, “We cannot pretend to have a different history.”

Imperial past haunting the present

Britain with its imperial past, has scores of statues, monuments and roads honouring its political and public figures who have a controversial history.

More than the colonial project, British merchants of the 17th and 18th centuries were actively involved in the trans-Atlantic slave trade, making huge fortunes in the process. London, Bristol and Liverpool are among the major UK cities that thrived on slave trade.

Edward Colston, for instance, was a 17th-century businessman, who was a deputy governor of the slave-trading company Royal African Company (RAC). His ships transported around 80,000 blacks from Western Africa to America and the Caribbean during the late 17th and early 18th centuries.

Many black slaves were transported in miserable conditions in packed ships — shackled, chests tattooed with the company acronym, RAC. Disease and hunger killed many of them during the long voyage to America and their bodies were thrown into the Atlantic Ocean.

Colston made a vast financial fortune for himself from the inhuman trade, but Bristol was an obvious beneficiary from his bequest. He established schools, funded charities and helped businesses in Bristol, contributing to its prosperity.

Inevitably, the country is in political convulsions over the statues; right wing groups on Saturday marched into London, claiming to “protect the statues from the anti-racism agitators” and clashed with police in Central London.

Six police officers were among those injured in the clashes, forcing Prime Minister Johnson to condemn the “racist thuggery has no place on our streets”.

Police, who were criticised for watching helplessly the toppling of Colston’s statue, have warned both groups to stick to their routes and not indulge in violence.

Meanwhile, a strange twist to the statue controversy was added with an online petition calling for the removal of the statue of Mahatma Gandhi in Leicester. The online petition has attracted about 5,500 signatures at the time of reporting.

The petition claims Gandhi was a “fascist, racist and a sexual predator”. Labour MP Claudia Webbe from Leicester East has termed the online petition a “massive distraction” from the Black Lives Movement, adding that Gandhi’s form of peaceful protest was similar to the Black Lives Movement, a force for change. She also said “there is not any desire from the black community to move that symbol of change”.

Across the nation, the opposition Labour-controlled local bodies also announced they would review the appropriateness of local monuments and statues on public land and council property, triggering calls for the Tory-held councils also to follow suit.

Without doubt, the calls to remove the monuments and statues linked to the slave trade and the colonial project have divided the nation. The protesters claim the moral high ground — how can a nation continue to honour men whose actions in the past cannot be justified under the 21st-century values?

But the critics of the statue-removal campaign point out that the past cannot be wished away. As a columnist in the right-wing Spectator magazine wrote most of the major roads in Britain were originally built using slaves; so were the railways and canals built by exploited workers.  Would we be willing to junk them and build them anew?

For the moment, the BLM and its supporters seem to be having the momentum. Even the most diehard defenders of the past are shaken by the George Floyd killing, which has provoked a massive rethinking of the state of race relations in the UK.

The black, Asian and ethnic minorities in the UK have had to face discrimination in opportunities for growth. Multiple studies have revealed the blacks have especially borne the brunt of racism in Britain, which though not as overt as in the US, has still hurt the community.

The killing of George Floyd and the subsequent international outrage have just helped focus the national attention on that unresolved issue in the UK.

(The writer is a journalist based in London)