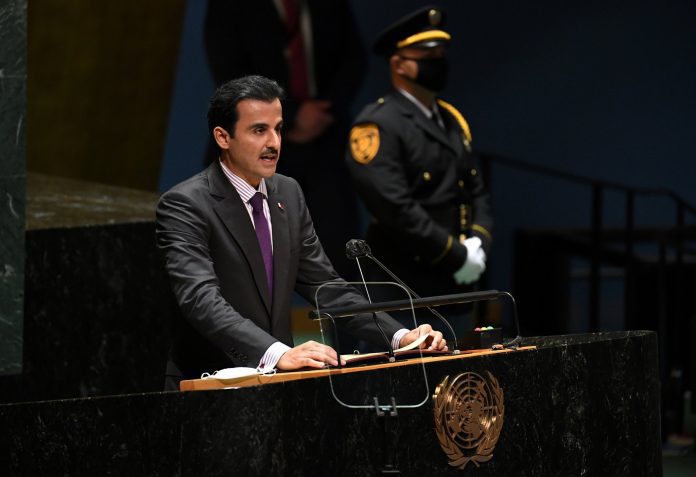 Sheikh Tamim’s warning was directed at the many heads of state worried about engaging with the Taliban, and recognizing their takeover of Afghanistan

Speaking from the podium of the UN General Assembly Tuesday, the ruling emir, whose country played a pivotal role in Afghanistan in the wake of US withdrawal, stressed the necessity of continuing dialogue with Taliban because “boycott only leads to polarization and reactions, whereas dialogue could bring in positive results.”

Sheikh Tamim’s warning was directed at the many heads of state worried about engaging with the Taliban, and recognizing their takeover of Afghanistan.

The Taliban say that they want international recognition. The group has challenged the credentials of Afghanistan’s former UN ambassador and are asking to speak at the UN General Assembly’s high-level meeting of world leaders. They say it is the responsibility of the United Nations to recognise their government and for other countries to have diplomatic relations with them.

Senior State Department officials said that they were aware of the Taliban’s request as the US is a member of the UN credentials committee, but they would not predict how that panel might rule.

However, one of the officials said that the committee would take some time to deliberate, suggesting that the Taliban’s envoy would not be able to speak at the General Assembly at this session, at least during the high-level leaders meet.

Not even a single country has yet formally recognized the Taliban’s ascension to power by force or its all-male Cabinet, which is stacked with senior figures who were previously detained in the US detention facility in Guantanamo Bay, Cuba, or are on a United Nations sanctions list.

The group has also said that this exclusively Taliban-run Cabinet is only interim, offering hope that a future government could be more inclusive.

In the spirit of diplomacy, Sheikh Tamim said that Qatar had agreed to host the Taliban’s political leadership in exile years ago, because they ‘were confident that war offers no solution and that there would be dialogue in the end’.

Qatar is a close US ally and hosts the largest US military base in the Middle East, but the tiny Gulf Arab state also has some sway with the Taliban. Because of its unique role, Qatar hosted direct US-Taliban talks around the American withdrawal from Afghanistan and helped facilitate evacuations from Kabul.

Now, countries like the US and Japan have relocated their diplomatic staff in Afghanistan to Qatar to continue diplomacy from there. Qatar is also assisting with the facilitation of needed humanitarian aid and with operations at Kabul airport.

Sheikh Tamim urged on Tuesday against repeating past mistakes in Afghanistan to impose a political system from outside.

“Regardless of intentions, efforts made and money invested, this experience in Afghanistan has collapsed after 20 years,” Sheikh Tamim said.

The 41-year-old leader said that the international community must continue to support Afghanistan at this critical stage and to separate humanitarian aid from political differences.

Afghanistan is among the world’s poorest countries and receives billions of dollars in foreign aid a year, though that could change with the U.S.-backed government out of power and the Taliban now in charge.

Uzbekistan, another neighbouring country to Afghanistan, has resumed the supply of oil and electricity to the war-torn country, according to its President Shavkat Mirziyoyev.

“It is impossible to isolate Afghanistan and leave it within the range of its problems,” Mirziyoyev said in his statement at the UN on Tuesday. He called for a permanent UN Committee on Afghanistan.

Also read: Why Qatar’s role is so important in Afghanistan after the US pullout

Earlier this week, Pakistan’s Foreign Minister told reporters at UN headquarters that Taliban rulers should understand that if they want recognition and assistance in rebuilding the war-battered country, they have to be more sensitive and more receptive to international opinion and norms. The top leadership of the Taliban has operated out of Pakistan for years, which shares a border with Afghanistan and is home to large numbers of Afghan refugees.

Despite their promises of an open and inclusive system, there have been numerous troubling signs that the Taliban are restricting women’s rights and targeting activists, and those they battled against as they settle into government, after taking control of the capital of Kabul last month. During their previous rule of Afghanistan in the 1990s, the Taliban had denied girls and women the right to education and barred them from public life.

Sheikh Tamim said it is up to the Afghan people to achieve a comprehensive political settlement and pave the way for stability. He touted Qatar’s outsized role in assisting with the chaotic US-led evacuation of more than 100,000 Afghans and others from Kabul in August, which he said was Qatar’s ‘humanitarian duty.’