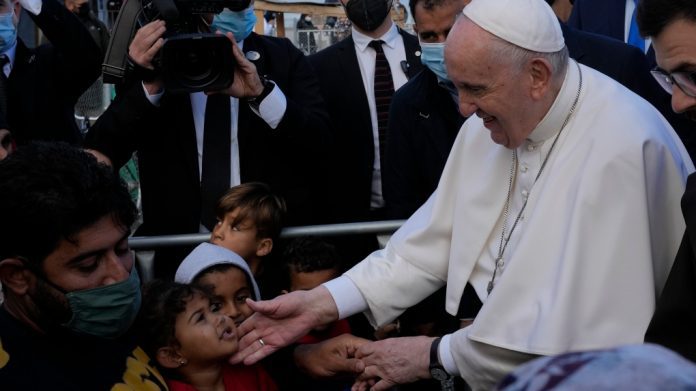 The Pope visited refugees at the Mavrovouni camp, which holds about 2,300 people. (Photo: AP)

Pope Francis on Sunday condemned the exploitation of refugees for political propaganda as he paid his second visit to the Greek island of Lesbos.

He rued that “little has changed with regard to the issue of migration” since his last visit five years ago to the island which serves as the main entry point for migrants and has become a symbol of the plight of refugees, reported Reuters.

The Pope, 84, visited refugees at the Mavrovouni camp, which holds about 2,300 people and whose perimeter is surrounded by cement, barbed wire and the sea. “Please, let us stop this shipwreck of civilization!” he said.

“I am here to see your faces and look into your eyes. Eyes full of fear and expectancy, eyes that have seen violence and poverty, eyes streaked by too many tears,” he told the refugees.

Also read: Why IMF thinks 30 poor nations are staring at an economic collapse

“In Europe there are those who persist in treating the problem as a matter that does not concern them,” the Pope reportedly said in a message to many nations. “It is easy to stir up public opinion by instilling fear of others,” he pointed out, adding that people who are anti-immigrant “fail to speak with equal vehemence” about the exploitation of the poor, wars, and the arms industry.

“The remote causes should be attacked, not the poor people who pay the consequences and are even used for political propaganda,” he said, according to the Reuters report.

The Pope further said it was “distressing” to hear that some European leaders wanted to use common funds to build a wall and put up barbed wire to keep immigrants out.