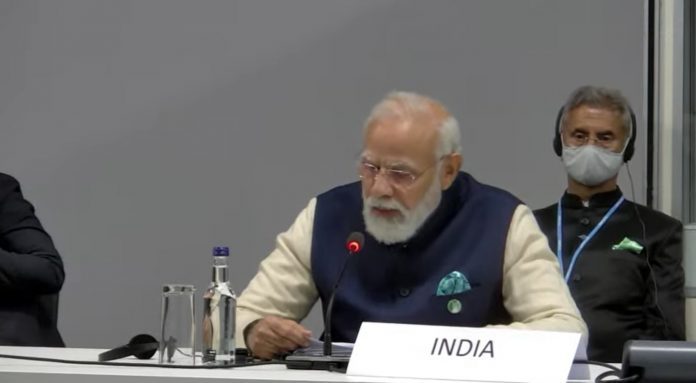 Speaking at the summit, Modi said, “India will reduce 1 billion tonne of carbon emissions from total projected emissions by 2030. India will also reduce carbon intensity by 45%. It’s the need of the hour to put pressure on those countries that have failed to deliver on their promises about climate finance.”

Modi asserted that India is the only country that is delivering in “letter and spirit” the commitments on tackling climate change under the Paris Agreement.

With 17 % of global population, India is responsible for just 5 per cent of emissions, Modi said, adding the country’s contribution to climate change mitigation has far outstripped its role in emissions.

Delivering the National Statement at the @COP26 Summit in Glasgow. https://t.co/SdKi5LBQNM

The Prime Minister reiterated that developed nations must fulfil the promised $1 trillion as climate finance, saying this should be tracked the same way as climate mitigation.

“India expects developed countries to make $1 trillion available as climate finance as soon as possible. As we track the progress of climate mitigation, we must also track climate finance. Justice would truly be served if pressure is put on those countries that have not lived up to their climate finance commitments,” Modi said.

“In the midst of this brainstorming on climate change, I would like to present five “Amrit Tatav” on behalf of India,” Modi said.

Here are the five statements that Modi described as “panchamrit ki saugat”.

Modi, who arrived in Glasgow on Sunday night from Rome, was received by British Prime Minister Boris Johnson and UN Secretary-General Antonio Guterres upon his arrival at the summit venue.

Also read: Is it fair to keep high expectations from climate change meet in Glasgow?

Modi was then seen interacting animatedly with Johnson and Guterres.
“Together for our planet! PM @narendramodi received by UK PM @BorisJohnson and UN Secretary General @antonioguterres as he arrives at the Scottish Exhibition Centre to attend the World Leaders Summit of @COP26, Ministry of External Affairs (MEA) spokesperson Arindam Bagchi tweeted.