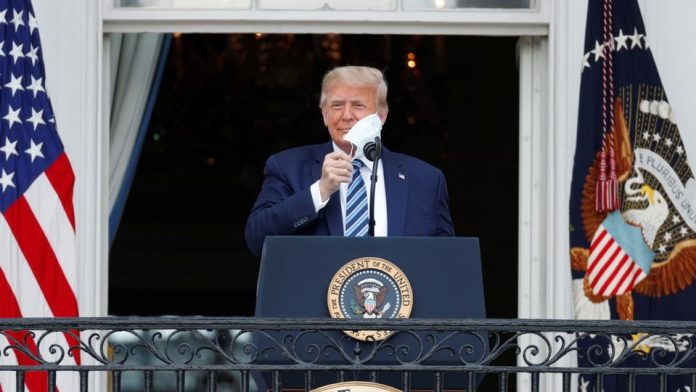 US President Donald Trump on Saturday (October 10) made his first public address after being discharged from hospital where he was treated for COVID-19 infection, assuring his supporters that he felt great.

Hundreds of Republican supporters sporting light blue t-shirts and the familiar red MAGA (Make America Great Again) caps gathered at the South Lawns of the White House as the president addressed them from his balcony in a campaign-style event.

“I am feeling great. This is the single most important election in the history of our country. Get out and vote, and I love you,” Trump told his supporters, looking healthy and energetic.

Trump, 74, and First Lady Melania, 50, tested positive for COVID-19 last week. The president was taken to a military hospital for treatment. After spending four days there, he came back to the White House on Monday.

“Our opponents will crush the comeback (from COVID-19) with unscientific lockdowns,” he said.

“We have a level of support the likes of which nobody has ever seen,” Trump boasted, as he launched into a riff on ballot fraud.

“I think we’re going to swamp them by so much it’s not going to matter,” he told his supporters, who frequently broke into chants of “four more years”, “we love you!, we love you”.

The White House described the address as an official event where the president delivered remarks to peaceful protesters in support of law and order.

Since taking office, Trump has been steadfast in his commitment to restoring law and order in the country while working with state and local law enforcement to protect communities and the rights of all Americans, the White House said.

In his address, Trump highlighted his administrations monumental achievements for communities of colour, including record employment, historic low poverty rates, criminal justice reform, billions of investment through opportunity zones, and unwavering support to school of choice.

Under Trumps leadership, the American dream is being restored for citizens all across our great nation and the forgotten men and women of America are no longer forgotten, it said.

Thanking his supporters for the prayers and the well wishes they offered to him and the First Lady this past week, Trump said through the power of American science and medicine they will eradicate the China Virus once and for all.

“Everyone here this afternoon is part of a growing nationwide movement called BLEXIT. Black and Latino Americans are rejecting the radical socialist left and they are embracing our pro-jobs, pro-worker, pro-police, and pro-American agenda. You understand that to protect the lives of Black Americans, and all Americans, we must support our police, he said.

Critical of Biden, the president said if the left gains power, they will launch a nationwide crusade against law enforcement taking away their funds, their firearms, and their fundamental authorities.

It is time for all Americans to stand up and reject the campaign of slander against our police from left-wing politicians and liberal pundits, he said.

Trump asserted that where there is evidence of wrongdoing by police, the criminal justice system must investigate and any perpetrators must be held accountable.

But we must never allow mob rule, he said. No one is hurt more by the left-wing war on cops than African-Americans. Last year, in just four Democrat-run cities, over 1,000 African-Americans were murdered as a result of violent crimes. And the riots, looting, and arson disproportionately hurt Black and Latino communities, he said.

We will build up peaceful and safer neighbourhoods with the highest standards of policing. We will create a healthcare system that delivers better care at lower cost, addressing chronic health disparities. And we will deliver school choice to every parent in America, he said.

We will support our police, we will restore safety to our streets, we will return our economy to full prosperity, and next year will be one of the greatest years in the history of our country! said the president.