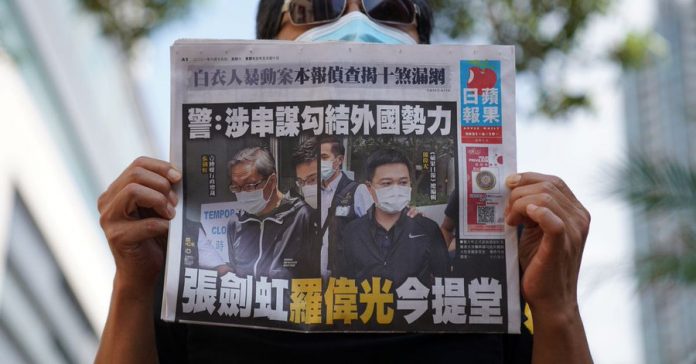 As Apple Daily, Hong Kong’s largest pro-democracy print media outlet, closed down with the publication of its final edition, people queued up early Thursday morning, braving the rains, to buy the tabloid.

By 10 in the morning, vendors had sold out, it was reported. Soon, Hongkongers were crowdsourcing an online spreadsheet of convenience stores that still held copies for sale, said a report in The Guardian. Meanwhile, hundreds of thousands thronged Twitter to bemoan its shutdown.

“Hongkongers bid a painful farewell in the rain: ‘We support Apple Daily’,” read the final front page headline of the paper.  A half-page photo showed the crowds of supporters gathered outside the newspaper office.

For its final edition, which hit the stands on Thursday morning, Apple Daily printed 10 lakh copies, against its usual print run of around 80,000, said news reports.

The publication went for a shutdown as the government accused it of breaching a national security law and froze the company’s assets, said a BBC report. This was viewed as a blow to freedom of the press under Beijing’s pressure.

Reuters quoted San Tsang, a supporter, as saying: “I think it’s the end of an era…I don’t understand why (Hong Kong) can’t even tolerate a newspaper.”

“I want to support it till the end,” said another reader, Amma Yeung. “The newspaper has accompanied society for so many years. After this, we will weather the storm.”

Describing the scene on Wednesday night, the BBC report said supporters had collected outside its office amid pouring rain. In a show of solidarity, they lit their phone flashlights. Shouts of “add oil” — a popular phrase of encouragement in the island that translates to “go for it” or “don’t give up” — were heard.

Apple Daily employees, equally emotional, waved back at them, shouting “Thank you, Hong Kong!” “Some were seen handing out free copies of the final copy to the supporters on the street,” said BBC the report.

Apart from ending its print publication, on Wednesday night, Apple Daily also closed down its online edition. Additionally, it ended its presence on social media, including its Twitter handle.

Was sent these pictures of people lining up to buy Apple Daily during lunchtime in Central today. (I instinctively began typing its Twitter handle and stopped myself when I remembered the account was gone.) pic.twitter.com/mRnRRsQijr

Apple Daily was said to be Hong Kong’s largest pro-democracy paper, and Beijing had for long been frowning on it for allegedly supporting dissent. Last week, its offices were raided by police over allegations that some of its reports had breached a newly enacted national security law, said BBC. The law is said to make undermining the government a criminal offence.

The tabloid was accused of publishing about 30 articles — since 2019 — appealing to other nations to impose sanctions on Hong Kong and mainland China. Law enforcement agencies froze the company’s assets and also arrested some senior staff. Jimmy Lai, the paper’s founder, is reported to be in detention since December 2020 under the same law.

Hong Kong, a former British colony, was ‘returned’ to China in 1997. But, amid widespread dissent among the islanders, Beijing agreed that some of their rights and freedoms would be safeguarded. The new national security law is said to undermine that pledge.