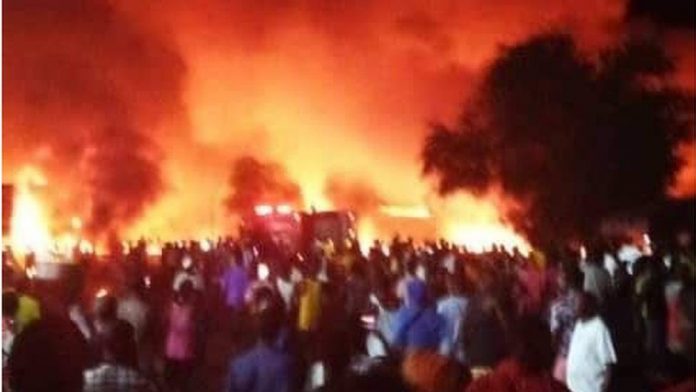 One media report said a bus full of people was burnt, while shops and market stalls were also afire. (Photo: Twitter)

A huge explosion at a petrol station in Sierra Leone’s capital Freetown has killed more than 90 people, burning people in cars and streets nearby, media reports said on Saturday.

“We recovered 80 bodies from the site of the accident last night with our ambulances,” a rescue worker from the Red Cross was quoted as saying by AFP.  While rescue operations are still on, the manager of the central state morgue in Freetown said it had received 91 bodies.

The explosion took place after a bus struck the tanker in the suburb of Wellington. Other media reports quoted witnesses as saying the accident happened when a vehicle caught fire at a petrol station after a road accident. The flames then spread.

“Victims included people who had flocked to collect fuel leaking from the ruptured vehicle,” Yvonne Aki-Sawyerr, mayor of the port city, said in a Facebook post. “The video and photo footage making rounds on social media are harrowing. There are rumours that more than 100 people have lost their lives.”

President Julius Maada Bio wrote on Twitter: “Deeply disturbed by the tragic fires and the horrendous loss of life. My profound sympathies with families who have lost loved ones and those who have been maimed as a result. My government will do everything to support affected families.”

One media report said a bus full of people was burnt, while shops and market stalls were also afire.

“We’ve got so many casualties, burnt corpses,” Brima Bureh Sesay, head of the National Disaster Management Agency, said in a video from the scene shared online. “It’s a terrible, terrible accident.”

In 2009, more than 100 people were killed when a petrol tanker overturned near Kenyan capital Nairobi and an explosion burnt those gathering to collect leaking fuel.

In 2019, at least 100 people were killed when a tanker exploded in Tanzania, while in 2015 more than 200 died in a similar accident in South Sudan.

Also read: Delhi, suburbs still in the grip of toxic air; relief likely only on Sunday