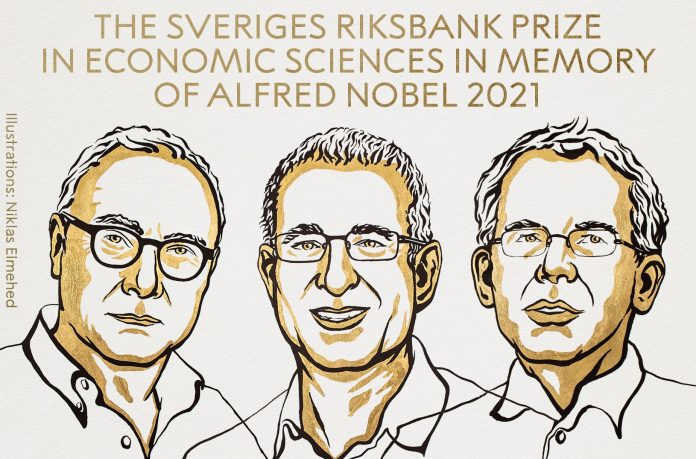 Nobel for Economics, formally known as the Sveriges Riksbank Prize in Economic Sciences in Memory of Alfred Nobel, is the last of this year's crop of Nobels and sees the winners share a sum of 10 million Swedish crowns ($1.14 million).

Three Americans share the 2021 Nobel prize for economics for their work on drawing conclusions from unintended experiments, or so-called ‘natural experiments’.

The winners are David Card of the University of California at Berkeley, Joshua Angrist from the Massachusetts Institute of Technology, and Guido Imbens from Stanford University.

Past Nobel Economics prizes have been dominated by U.S. institutions and this was no exception.

David Card is a Canadian labour economist and Professor of Economics at the University of California, Berkeley. He has won the prize “for his empirical contributions to labour economics.”

Card has analysed the labour market effects of minimum wages, immigration and education by using natural experiments. His studies from the early 1990s challenged conventional wisdom, leading to new analyses and additional insights. The results showed, among other things, that increasing the minimum wage does not necessarily lead to fewer jobs.

“We now know that the incomes of people who were born in a country can benefit from new immigration, while people who immigrated at an earlier time, risk being negatively affected. We have also realised that resources in schools are far more important for students’ future labour market success than was previously thought,” the statement by the Nobel Committee read.

Meanwhile, Joshua Angrist and Guido Imbens won the prize “for their methodological contributions to the analysis of causal relationships.”

In the mid-1990s, Joshua Angrist and Guido Imbens demonstrated how precise conclusions about cause and effect can be drawn from natural experiments.

“The researchers were honoured for providing us with new insights about the labour market and showing what conclusions about cause and effect can be drawn from natural experiments”, the Nobel committee said in a statement.

The prize winners will share a sum of 10 million Swedish kronor (over $1.14 million). The prize money comes from a bequest left by the prize’s creator, Swedish inventor Alfred Nobel, who died in 1895.

The Royal Swedish Academy of Sciences said the three have ‘completely reshaped empirical work’ in the economic sciences.

The Nobel Prize for economics, formerly the Sveriges Riksbank Prize in Economic Sciences, is the last Nobel prize to be announced every year. Unlike the other Nobel prizes, the economics award wasn’t established in the will of Alfred Nobel, but by the Swedish central bank in his memory in 1968.

The 2021 Nobel Peace Prize was awarded to journalists Maria Ressa of Philippines and Dmitry Muratov of Russia for their fight for freedom of expression in countries where reporters have faced persistent attacks, harassment and even murder.

UK-based Tanzanian writer Abdulrazak Gurnah won the Nobel Prize for literature, for his “uncompromising and compassionate penetration of the effects of colonialism and the fate of the refugee.”

The prize for physiology or medicine went to Americans David Julius and Ardem Patapoutian for their discoveries into how the human body perceives temperature and touch.