China and the US seem to be taking their rivalry up to the Mars with both countries capitalizing on the red planet’s proximity with Earth to launch their probes.

China is all set to launch Tianwen-1 on Thursday (July 23), its most ambitious, first interplanetary mission to Mars which has three spacecrafts including an orbiter, lander and a rover to explore the planet’s surface. If the mission turns out to be successful, China will be only the second country after US to land and operate a rover on Mars. Russia is the only country other than US to have attempted this and failed twice.

NASA was the first to launch a rover Curiosity, in 2011 as part of its Mars Science Laboratory mission to search for any evidence of life that could have once existed on the planet.

With China’s lift off scheduled on 23 July and US on 30 July, both countries are competing with each other to take advantage of the situation when Mars and Earth will be closest and favourable to send their probes. 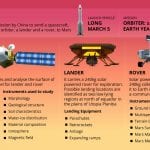 It seems like its going to be quite a crowd up there at the red planet with UAE only on 19 July launched its first ever interplanetary mission ‘Hope’ to Mars, to study the weather of the planet. However the more thrilling race into deep space would be the one between India and China as the latter has always eyed to supersede the former’s dominance in space exploration.

The Chinese mission Tianwen-1 means “Questions to Heaven” and is a nod to a classical poem that has verses about the cosmos. It is expected to be launched on China’s biggest rocket Long March 5, from the southern island of Hainan.

The three-combo-spacecraft will spend seven months in space, journeying to Mars and will reach the planet sometime in February 2021. That month will also mark the arrival of UAE’s Hope, as well as the arrival of NASA’s new Perseverance rover, which is set to launch on July 30th.

“As a first try for China, I don’t expect it to do anything significant beyond what the US has already done,” said Jonathan McDowell, an astronomer at the Harvard-Smithsonian Center for Astrophysics, reported AP.

America has sent four rovers to Mars since 1990. Perserverance, the fourth rover and a descendant of Curiosity will land near Jezero crater which is believed to be a river delta nearly 4 billion years ago by scientists. The rover’s mission would be to collect samples of Martian dirt that might have signs of life.

“China joining (the Mars race) will change the situation dominated by the US for half a century,” said Chen Lan, an independent analyst at GoTaikonauts.com, which specialises in China’s space programme, reported AP.

Chinese National Space Administration has remained tight lipped about the specifics of the mission or the landing site, but it is expected to land on a plain Utopia Planitilia, in the largest impact crater in Mars.

The rover will spend three months studying the surface of the planet once it is deployed.