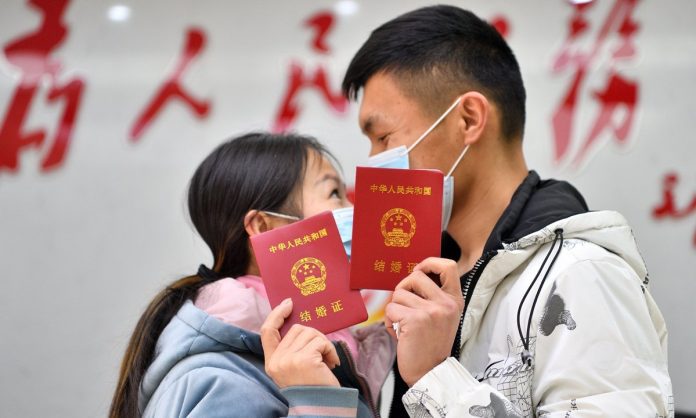 China’s demographic crisis is real and worsening by the year. On top of the worrisome decline in birth rates has come a new set of depressing figures for the world’s second-largest economy — a sharp fall in number of marriages.

The numbers of marriages in China last year dropped to a 36-year low, and experts say this will add to declining birth rates in the country. A total of 7.63 million couples registered to get married across China in 2021, a record low since 1986 when the Ministry of Civil Affairs started to release such statistics.

The decline in the number of marriage registrations will inevitably result in further decline of birth rates in China, He Yafu, an independent demographer told state-run Global Times.

These figures come close on heels of National Bureau of Statistics (NBS) report earlier this year that China’s birth rate fell for the fifth consecutive year; China’s population grew by less than half a million last year to 1.4126 billion.

This has raised fears of adverse impact on the country’s economy in future. The population of young people is falling in the country; which means the work force will reduce drastically as the years go by if the birth rates continue to fall.

According to He, marriage registration numbers in China have been declining for eight consecutive years due to a declining number of young people, more men than women of marriageable age and the decision to put off marriage until they are older. Besides, due to Chinese women’s rising educational and economic development, their willingness to get married is even lower than that of men.

Falling marriage rates are seen in both rural areas and big cities, because the costs of marriage and child-rearing are rising in both underdeveloped and developed areas, James Liang, economist and chairman of China’s leading travel agency Trip.com, said. Also, ages of Chinese couples who tied the knot had risen significantly.

The root of this crisis lies in the draconian one-child policy implemented in 1980. The one-child policy continued till 2016 when its fallout dawned on the authorities. In 2016, China permitted all couples to have two children.

This did result in a minor uptick, but the success was short-lived. There was marked reluctance in couples to have more children as that meant mounting cost of living. Beijing further relaxed the norms last year by allowing Chinese couples to have three children.

Local governments are churning out a flurry of propaganda slogans and policies to encourage more births. The common incentives include cash handouts, real estate subsidies and extension of maternity leave, says a report by CNN.

Last year, more than 20 provincial or regional governments amended their family planning laws, including extending maternity leave for women. For example, eastern Zhejiang province offers 188 days of maternity leave for the third child; and in northern Shaanxi province, women can enjoy 350 days paid leave for having a third child, according to state media reports. But the policies have failed to convince many women, who worry they’ll be further disadvantaged as companies seek to avoid the extra financial burden, CNN reports.

The census figures revealed the demographic crisis China faced was expected to deepen as the population above 60 years grew to 264 million up by 18.7 per cent.