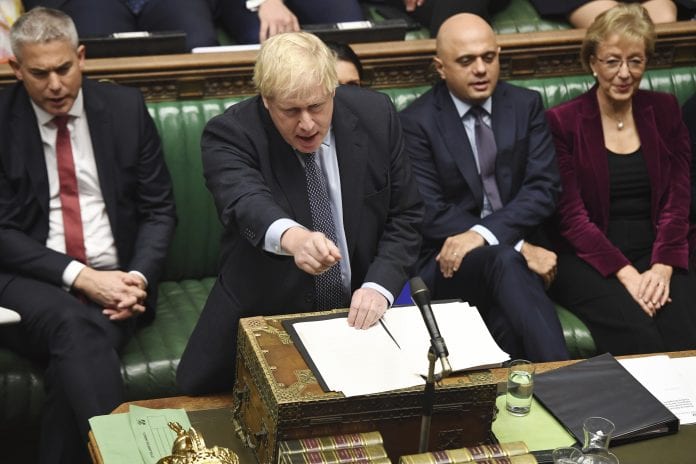 British Prime Minister Boris Johnson on Tuesday (October 22) “paused” his Brexit Bill for leaving the European Union (EU) by the October 31 deadline after MPs voted for it 329 to 299.

However, they voted against a crucial attached motion that would have seen the bill through by the end of the week.

“I must express my disappointment that the House has voted for delay rather than a timetable that would have guaranteed the UK could leave on 31 October with a deal. We now face further uncertainty,” Johnson told the House of Commons after the final of two important votes on Tuesday.

“The EU must now make up their mind at how to answer Parliament’s request for a delay. The government must take the only responsible course and accelerate our preparations for a no-deal outcome. Until the EU has reached a decision we will pause this legislation,” he said.

Earlier, the bill had cleared the first parliamentary hurdle, with MPs backing it 329 votes to 299. It effectively meant his Brexit withdrawal agreement with the EU could become law, but the MPs then voted 322 to 308 against the sped-up timetable for the bill.

Johnson had threatened to pull the bill and seek a general election instead of delaying Brexit beyond the October 31 deadline.

After publishing the EU Withdrawal Agreement Bill, or the so-called EU divorce bill, on Monday night, Johnson opened it up for debate by MPs in the House of Commons on Tuesday afternoon with plans to hold a vote on a sped-up timetable for its passage by the end of the week.

While Opposition MPs accused him of trying to dash through a 110-page legislation without proper scrutiny, Johnson threatened to remove the Bill entirely if his timetable for its passage is rejected and revert to demanding a General Election instead.

“I will in no way allow months more of this. If Parliament refuses to allow Brexit to happen and instead… decides to delay everything until January, or possibly longer, in no circumstances then [can] the government continue with this, Johnson told MPs earlier in the day.

“And with great regret, I must say that the Bill will have to be pulled and we will have to go forward to a general election and I will argue at that election, let’s get Brexit done,” he declared.

Johnson had agreed to what he termed as a “great new deal” with the EU last week, which gets rid of the controversial Irish backstop seen as a threat by Brexiteers. They had repeatedly voted it down as part of former Prime Minister Theresa Mays deal on the grounds that it could keep the UK tied to EU rules long after Brexit.

Under the reviewed deal negotiated by Johnson, Northern Ireland would be subject to limited border checks via an invisible border in the Irish sea with neighbouring EU member-country Ireland. This proved unpalatable to Northern Ireland’s Democratic Unionist Party (DUP), which withdrew its support to Johnson’s minority Conservative Party government in a crunch vote over the weekend.

This has meant Johnson has struggled to get the numbers required for his agreement to cross the parliamentary threshold.

With the new Withdrawal Bill set for its crucial second reading vote later on Tuesday evening, the UK PM will be hoping for enough numbers to defect from the Opposition benches to cross the finish line.

However, his biggest challenge will come in the form of a second Commons vote soon after, termed the programme motion.

This would give him the required backing to rush through the various parliamentary stages involved to see the EU Withdrawal Agreement Bill through in time to meet the October 31 Brexit deadline, without requiring another extension from the EU.

“If we reject this new deal what would the House be saying to the country and to the world? What’s the alternative course of action open before us, to undo Brexit, cancel the greatest democratic exercise in this countrys history let us work night and day if that is what it takes to get this done,” said Johnson in his plea to MPs to back his timetable for the Bill.

But the decision to curtail the parliamentary scrutiny of the new legislation to just three days has sparked anger among Opposition MPs.

The anti-Brexit Liberal Democrat party’s spokesperson on Brexit, Tom Brake, said: “The Tory government’s threat to pull the Withdrawal Agreement Bill if they lose the vote on their rushed timetable, is childish blackmail.

“MPs shouldn’t be bullied into voting in favour of this ridiculously short timetable.”
Meanwhile, European Council President Donald Tusk told the European Parliament in Strasbourg on Tuesday he was consulting the other 27 EU leaders on how to react to the UKs request for a Brexit delay and “will decide in the coming days”.

“I have no doubt that we should treat the British request for extension in all seriousness,” he said, in reference to the unsigned letter sent by Johnson last week to comply with the Benn Act because Parliament had failed to agree on a deal during the Super Saturday session of the Commons.

If the UK government fails in its last-ditch attempt to get the new Brexit bill through Parliament in time, the default legal position remains for Britain to crash-out of the economic bloc without a deal on October 31.