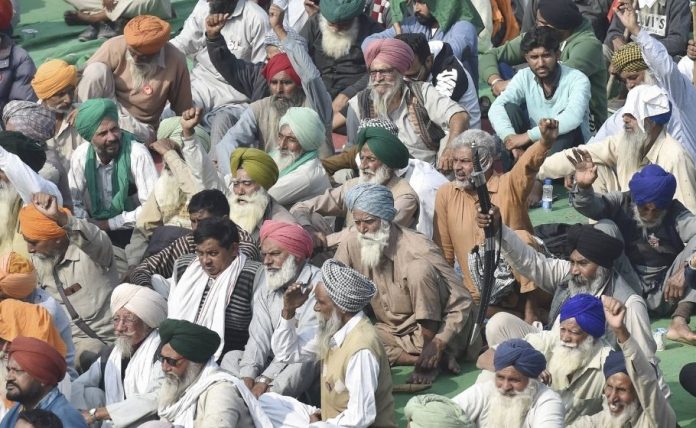 Everyone has heard the ‘Jai Jawan, Jai Kisan’ slogan from India’s second Prime Minister Lal Bahadur Shastri, but most people focus on the former part of the saying. The later part seemed lost until farmers came to Delhi to protest for their rights. Farmers have been agitating at the national capital to protest against the central government’s three farm bills and seeking an assurance on the minimum support price (MSP) by incorporating the guarantee in law.

Randhir Singh, sarpanch (head of the village) of Alewa village in Jind district of Haryana, told The Federal, “We did not ask for these three farm bills. What we were asking was a better MSP for our crops and fair auctioning system in the mandis (Agricultural Produce Market Committee (APMC)).”

The MSP is an agricultural product price set by the government of India to purchase directly from the farmers to safeguard them to a minimum profit for the harvest if the open market has a lesser price than the cost incurred. APMC is a marketing board established by the state governments for farmers to sell the produce at MSP.

In APMCs, farmers take their produce to arthiyas (middlemen) who help them in selling it to the government or private buyers after auctioning. In return, they take 2-5% commission from farmers.

Sunil Lather, a farmer based out of Lakhanmajra village of Rohtak district of Haryana, said, “It is tough to make ends meet doing farming. In November, I sowed wheat on my two-acre land. I spent nearly ₹1,600 per acre on the seeds and nearly the same amount on land preparation for wheat cultivation.”

A ₹2,000 profit per month for an acre shows the plight of farmers in a state like Haryana where 67 per cent of people are dependent on farming, of which 80 per cent are small or marginal farmers owning less than two acres of land.

Asked why wheat is not sold to private players, Sunil said, “No one from the private sector buys wheat in Haryana and even if someone does, they just give us ₹800-1,000 per quintal.”

He added, “I will take loan, even sell my land to educate my children, but I will never allow them to do farming. It looks so much lucrative to the world but we know it is a cycle of debt. I don’t want my children dying every day like me.”

In Haryana, farmers also grow paddy, mustard and cotton. The MSP for paddy is ₹1,888 per quintal. Rajbir Malik, a farmer based out of Kaithal district, sold his paddy at MSP just a month ago. He said, “Profit in rice and wheat is more or less the same. In paddy, the input cost comes to about ₹30,000 per acre from which we get nearly 25 quintals of paddy and it is sold for about ₹40,000 per acre.”

Ishwar Singh, a farmer from Satrod village of Hisar district, said, “We grow mustard and if we grow it in our entire land, we will get nearly 100 quintals of mustard, but the government procures only 25 quintals per individual. We have to sell the remaining to  private players who give only ₹2,500-3,000 per quintal. So I only grow limited mustard on our land and I cultivate wheat and rice on the remaining land.”

‘Farmers can never be profitable’

Jaidev Bansal, a middleman from Narwana village in Jind district, said that he has never seen a farmer in profit. He said, “Most of the farmers ask for loans from us. I have given loan to farmers for education or marriage of their children.

“I have never seen private players procuring crops at a price better than the MSP, but even by selling at MSP, a farmer can never be profitable,” Bansal told The Federal.

Devinder Sharma, an agriculture policymaker from Chandigarh, said that the farmers are not mad that they are sitting on roads in winter for so many days to get the farm laws repealed. He said farmers of India do not get enough subsidies like those in European countries and the US, which offer $60,000 every year to a farmer. India gives only $200 per person.

“The Shanta Kumar Committee had suggested increasing the MSP by 50%, but the government never implemented the suggestions of the committee. The report clearly states that farmers are in huge loss, and it mentions the plight of farmers in Haryana as well. If you see the suicide rate of farmers in Haryana or any other state, you will get to know the real situation.

“On top of it, the government brought bills that seem to be aimed at removing the MSP and the  mandi system entirely. These bills are really a death sentence for farmers.”

To read the second story in the series, click here: Farmers irked as govt moves to recover ‘wrong’ payouts in PM Kisan scheme

To read the third story in the series, click here: Bengal farmers need reform but not contentious farm laws

To read the fourth story in the series, click here: Telangana govt takes on farm laws to protect its farmer-friendly image

To read the fifth story in the series, click here: Kerala farmers safe for now from new farm laws, but may not be so for long

To read the sixth story in the series, click here: Why TN delta farmers continue to struggle with short-term cropping

MSP on agri produce has gone up, but does the farmer care?