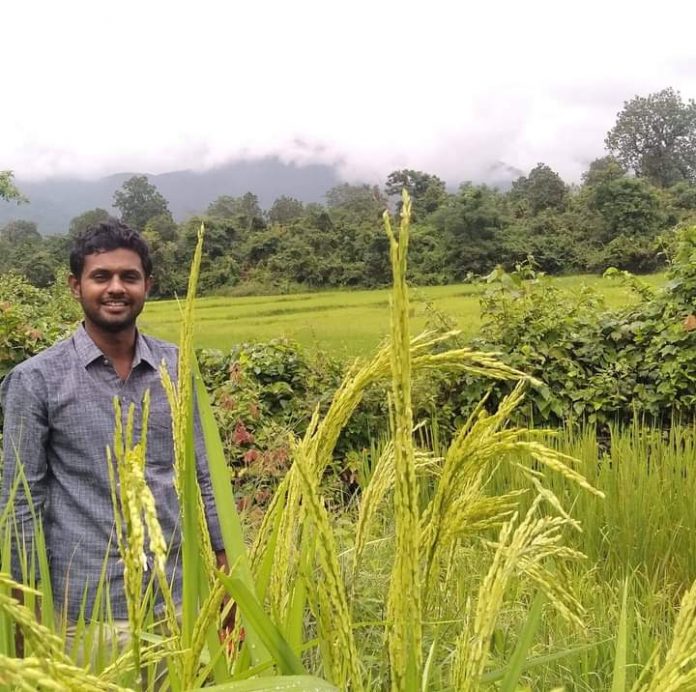 Paddy landraces such as ‘Kattuyanam”, “Mappilai Samba”, “Illuppaipoo Samba”, “Rathasalli” and “Kichilisamba” are some of the native paddy seeds that Ganapathy Thamizhselvan has distributed to poor farmers so far to promote natural farming.

An agriculture expert in search of a native but lost variety of paddy recently found it in the collection of a youth in Kancheepuram in Tamil Nadu. The youth, Ganapathi Thamizhselvan, is a natural farmer, who has been distributing native paddy seeds to poor farmers at his farm in Thiruputkuzhi, a village in Kancheepuram district.

Ganapathi Thamizhselvan, 33, has done BSc (microbiology) and has a scientific temperament, which he has used to conserve over 100 indigenous rice varieties so far.

Tamil Nadu once had innumerable varieties of paddy landraces, which were resilient to climatic changes, pest and disease infestations. They grew from two feet to eight feet with yielding that varies from 65 to 200 days. However, introduction of hybrid paddy varieties, done as part of the Green Revolution in the 60s, replaced these landraces with high yielding varieties. “I have collected more than 150 paddy landraces so far which are cultivated separately in my farm. The idea is to test each one’s genetic quality and resilience. Once satisfied, I distribute them to poor farmers in and around my village,” says Thamizhselvan.

Paddy landraces such as ‘Kattuyanam”, “Mappilai Samba”, “Illuppaipoo Samba”, “Rathasalli” and “Kichilisamba” are some of the native paddy seeds that Thamizhselvan has distributed to poor farmers so far to promote natural farming.

Thamizhselvan also loves to check the genuineness (whether the seed is pure or mixed one) of native paddy seeds. For this, he sows rare varieties of seeds in his field and observes their basic characteristics right from the germination stage. Thamizhselvan keeps a record of water consumption, pest infection etc throughout the growth process. He does so not only because of his love for paddy, but also because he wants to send these reports to agri NGOs and other research organisations for further studies.

Thamizhselvan started collecting native paddy seeds way back in 2009, following the footsteps of his guru, G Nammalvar. But he took up the task seriously after his first meeting with Nammalvar in Chengalpet in the beginning of 2013. “During Nammalvar’s visit to Chengalpet, I gifted him a painting depicting farmers with paddy landraces in their hands. He (Nammalvar) showed it to the people present there and appreciated my efforts. It was a great recognition for me,” says Thamizhselvan, who did his graduation in BSc (microbiology) from Sri Sankara Arts and Science College, Kancheepuram. Though he scored good marks in the first year of MSc (microbiology) at Periyar University, he couldn’t continue his studies due to financial difficulties.

In 2018, a visit to Basudha, a farm established by rice warrior Debal Deb in Rayagada district of Odisha, proved to be a turning point in Thamizhselvan’s life. Debal Deb, who is called India’s rice warrior, has conserved more than 1400 varieties of paddy landraces. “More than 1000 varieties of paddy landraces are grown in Basudha farms. I could interact with farmers there and got useful tips from Deb on how to conserve vanishing rice varieties. Debal da even gave some paddy seeds to me. Since then I have been experimenting with various native paddy seeds,” says the 33-year-old farmer.

Thamizhselvan spent a couple of weeks at Basudha, where he not only learned lessons on conservation of vanishing rice varieties, but also understood ecological architecture. “The workshop taught me how to make houses using natural materials such as clay, stones, lime mortar and mud. Everything at Basudha was done using materials found in and around the village and nothing was brought from outside,” he adds.

Back home, Thamizhselvan did two things: Strengthened his search for paddy landraces across Tamil Nadu and designing eco houses for farmers. Lessons in ecological architecture, taught by Debal Deb, inspired him to look at weaver bird’s nests. “I have made four farmer-friendly eco houses in various parts of Tamil Nadu using mud, clay and bamboo. The nest of the weaver bird always fascinated me. It inspired me to make eco houses, using basic natural materials available around,” says Thamizhselvan, who lives at his ancestral house, which is more than one hundred years old.

The natural farmer says that convincing the farmers about paddy landraces is challenging. “Many of them stopped farming mainly because they were not able to afford the cost of farming. Rising labour expenses was another challenge. Convincing the farmers about the benefits of native paddy seeds is challenging. So, I take them to my farm and show them how I cultivate native paddy seeds. The response is good,” says Thamizhselvan, adding, “many approach him for native paddy seeds these days.” It’s a good sign, says the young farmer. “In Tamil Nadu, we had vibrant varieties of paddy seeds, which are known for their high nutritional and medicinal value. Many are drought-resistant. It’s high time we brought them back,” he adds.