The ninth month of the Islamic calendar and the holy month of fasting, Ramadan, has begun from April 23 with the first sight of the moon.

This is the month when the entire Muslim community strictly abstain from eating, drinking, smoking, sexual intercourse as a part of religious ritual.

However, the length of the fasting (in hours) depends on the timings of sunrise and sunset. This means that Ramadan fast is not the same across the world.

Related news: Ramzan helpline to reach out to faithful, doctors to give tips on keeping healthy

Depending majorly on the geographic locations, the hours of fasting range from 18.5 to 11.4 hours which means the nearer you are to the north pole, the longer will be the fasting, while the more you go towards the south pole, it keeps decreasing.

The Federal tried to look at nine such cities for a simple comparison of the hours of fasting during Ramadan. 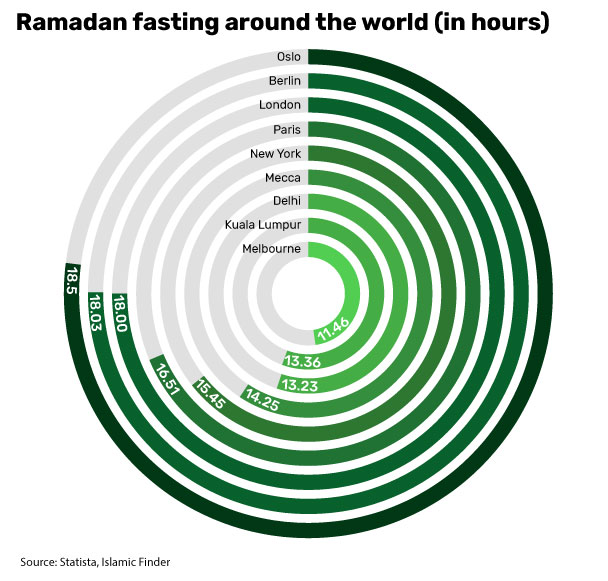 The Muslim community residing in Oslo, the capital of Norway, observes the longest fasting duration which goes beyond eighteen hours. However, those living in the southernmost cosmopolitan city, Melbourne in Australia observe around 11 hours 46 minutes of Ramadan fast.

As one comes down south, people in Berlin and London have around 18 hours of fasting while in Paris those following Islam observe 16.61 hours of abstainment in a day. Muslims living in New York hold about 15.45 hours of fasting on the same day.

Mecca, which is the sacred place for the Muslims, witnesses people from the community fasting for around 14.25 hours.

Meanwhile, in Delhi, fasting is observed for around 13.23 hours while Malaysia, Kuala Lumpur, has a similar time of fasting as that of India.

The hours of fasting keeps changing according to the time of sunset and sunrise on a respective day. In simple terms, sunrise marks the beginning of the fast while the sunset marks the end of the same.

Note: All the timings correspond to May 9 which marks the half month of the Ramadan.