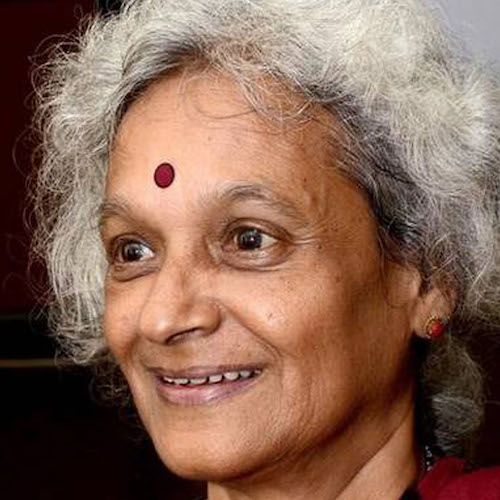 Chitoor Subramaniam Lakshmi, who writes under the pseudonym Ambai, is a well-known independent women’s studies researcher.

After a 16-year gap, a Tamil woman writer has won the Sahitya Akademi Award. In the 66 years of the Akademi’s history, Ambai is only the fourth Tamil woman writer to receive the prestigious literary award, the others being Rajam Krishnan (1973), Lakshmi (1984) and G Thilakavathi (2005). This speaks a lot about the space for feminist writing in the Tamil literary world.

The work that fetched Ambai the Akademi Award is her short story collection titled Sivappu Kazhuththudan Oru Pachai Paravai (‘A green bird with a red throat’).

Chitoor Subramaniam Lakshmi, who writes under the pseudonym Ambai, is a well-known independent women’s studies researcher. She founded the NGO Sound and Pictures Archives for Research on Women (SPARROW) in 1988, in Mumbai, which collects women-related oral histories and visual materials.

Ambai entered the Tamil literary world in 1962 as a teenager. She started writing stories for the children’s magazine Kannan at the age of 16. She won the first prize for her work Nandi Malai Charaliley in the novel competition conducted by the magazine. Following that she started publishing her short stories in various magazines including the popular Ananda Vikatan.

As a writer who focuses mainly on women and their lives, Ambai has published seven short story collections till now. Her short stories such as Siragugal Muriyum, Veettin Moolaiyil Oru Samayalarai, Kaattil Oru Maan and Andheri Membalathil Oru Sandhippu were well received.

Sivappu Kazhuththudan Oru Pachai Paravai, the Akademi Award winner, is her seventh short story collection, published by Kalachuvadu Publications in 2018. It was translated into English by GJV Prasad as A Red-necked Green Bird and published by Simon and Schuster India in 2021.

The collection has 13 short stories, of which a half-a-dozen deal with men and women with disabilities, and their families. At least in eight stories death is a recurring theme. And all the 13 short stories revolve around women and their lives.

Also read: Sexual harassment of girls, suicides on rise; what should Tamil Nadu do?

The first story in the collection, Thondai Pudaitha Kaagam Ondru, talks about a woman’s relationship with her father affected by dementia. She believes that after his death, her father has reincarcerated as a crow. The second story, Saambal Mel Ezhum Nagaram, portrays a woman named Urmila, who immolates herself because of her fatigue arising from taking care of her bedridden mother-in-law. Her husband is dead and her sister-in-law has a mental illness, which leaves the daughter-in-law and mother-in-law a lone twosome.

In Payanam 21, the writer depicts the stress undergone by an erstwhile dancer, who is now affected by a stroke. The stress arises from her wanting to know whether copies of a book published on her are still available in the dusty godowns of a government publishing house, or whether they burnt to ashes. The story Veezhthal talks about a woman who decides to take her own life, as she is unable to bear the separation from her husband who died of a brain clot.

In Vil Muriyatha Suyamvarangal, the author shows the children of a widow taking efforts to send her to an old age home and cajoling her to choose a companion in that home; however, they do not approve of her idea of living with a younger man, in her own house. The story Singathin Vaal portrays a computer engineer’s delirium, as she thinks she has a relationship with a cyborg.

Call of a coppersmith barbet

Of the 13 stories, the one that stands out is the titular one — something Tamil writer Sujatha would call a sattrey periya sirukathai (a slightly longer short story). The story, Sivappu Kazhuththudan Oru Pachai Paravai, was first published in the August 2017 issue of Manal Veedu magazine.

The story talks about how Thaenmozhi, a young hearing-impaired woman, expresses her dissatisfaction with her father’s plan to get her a cochlear implant. Her mother encourages her to learn sign language and disapproves of her husband’s decision. What happens when Thaenmozhi does not accept her father’s decision forms the rest of the plot.

The bird which the author refers to as ‘green bird with red throat’ is a coppersmith barbet. She talks about this bird in the story from the father’s point of view, who likens it to Thaenmozhi. The bird’s call, ‘tuk, tuk, tuk’, sounds similar to a coppersmith striking a metal with a hammer. Hearing the bird’s call, Thaenmozhi’s father feels the voice of the bird has been arrested and hence it is unable to express itself fully.

On speech and language

In the end, Thaenmozhi, a fine arts student, publishes an article titled Mozhi Enbathu Oli Alla (‘Language is not about sound’) in a magazine, where she underlines the life and works of Alexander Graham Bell. Most people know Bell as the inventor of the telephone but not many know about his contributions to ‘visible speech’ — a system of phonetic symbols to represent the position of speech organs in articulating sounds. He advocated this method to instruct the hearing and speech impaired. He believed that educating them through this method is more effective than sign language.

Thaenmozhi also refers to Satish Gujral, a hearing-impaired Indian painter who underwent surgery at the age of 78 to remove the cochlear implant he had had six years before. She ends the article saying, “Language is for communication. It can happen even soundlessly.”

Of the 13 stories in the collection, only four have been published earlier in various magazines. By inserting some of the popular Carnatic songs like Naaneke badavanu of Purandara Dasa, Bollywood songs like Aansu Bhari Hai (Parvarish, 1958) and Bahinabai Chaudhari’s poems, Ambai takes this short story collection to a philosophical level.