South Africa’s Zozibini Tunzi has been crowned Miss Universe for the year 2019, beating more than 90 contestants, including Miss India, from around the globe.

The 26-year-old Tunzi was declared the winner at a televised event, hosted by American comic-turned-TV personality Steve Harvey, held at Tyler Perry Studios here on Sunday. 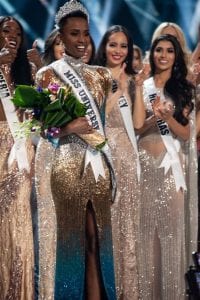 Indian contestant Vartika Singh crashed out of the worlds biggest beauty pageant after securing a place in the top 20.

Miss Puerto Rico Madison Anderson was named the first runner-up, followed by Mexican contestant Ashley Alvidrez as the second runner-up. Also part of the top 5 were Colombia and Thailand.

Miss Universe 2018 Catriona Gray, from the Philippines, presented Tunzi with the crown.

This is the third Miss Universe crown for South Africa, with Demi-Leigh Nel-Peters being declared the winner in 2017.