Once upon a time, more than once, Kalahandi district, located in the western pocket of coastal Odisha had grabbed national and international headlines, for all the wrong reasons – droughts, starvation, migration etc. However, today, Kalahandi has again drawn the attention of many people including celebrities, thanks to the rap songs of a 27-year-old Dalit migrant worker, Duleshwar Tandi, now famously known as, rapper ‘Dule Rocker’.

Tandi’s rap songs ‘Hashtag Farmer’, ‘Doctor’ and ‘Sarkar jabab de’ have taken the internet by storm. He writes his own lyrics, records video of the songs on his mobile from a muddy hut in his nondescript village, Borda, 35 kms from the district and block headquarters in Bhawanipatna.

Likened to Bollywood actor Ranveer Singh’s character in the 2019 flick ‘Gully Boy,’ Tandi, is no less than a local hero, today. His rap songs that depict the plight of migrant workers during the lockdown due to COVID-19, has struck a chord with netizens. His songs in Kosali, Hindi and English have gone viral.

Disturbed by the tedium of migrant workers long, barefoot, walking home with kids on shoulders, Tandi wrote the lyrics of Telling the Truth and made a 2.45-minute rap video. In it, he vents his anger against the politicians, calling them thieves. In May, he made a 3.5-minute rap video called Sun Sarkar, Sat Katha, which is about the coronavirus disease and subsequent distress which battered the hapless migrant workers’ livelihoods.

“I always dreamt of being a rapper,” says the shy, internet sensation. Given the adulation he continues to receive, one can say he has almost realized his dream.

People of all ages, top celebrities, including actors Priyanka Chopra, Swara Bhaskar, Richa Chadha, popular composer Vishal Dadlani, acclaimed singer Rekha Bhardwaj, rappers, Raftaar and Divine, and journalists, everyone seems to have been smitten by the charm of his talent and style. The celebrities have tweeted praising Tandi’s art.

This is incredible! @DuleRocker, if you need help producing/ recording/ releasing your music, get in touch. I'll do what I can. I'm sure we all will! @DevrajSanyal @raftaarmusic @VivianDivine @Its_Badshah check this fire out! https://t.co/vF7ed4JA5A

Not only tweets. Tandi has received calls too from Dadlani and famous actor Rana Daggubati. “Offering all help, Vishal sir has told me to come to Mumbai, while Rana sir, has welcomed me to Hyderabad, anytime,” Tandi informs. “I can’t believe that those who I watched on TV or read in newspapers about, revered as my God, would praise me. It’s like a dream for me,” he adds.

Shooting into stardom from being a migrant worker in the COVID era, Tandi has traversed quite a lot; his has been an incredibly fascinating journey, so far.

Seasoned journalist from the area, Rajib Sagaria, who has extensively reported on the endemic poverty driven ills of Kalahandi-Bolangir- Koraput (KBK) region, broken many stories, sounds upbeat. “It’s rare to find a positive story from Kalahandi. Tandi has given us a great story to file.” Sagaria says.

Ironically, before boarding the bus for the 12-hour-long journey from Raipur to his village on May 23, a day before the national lockdown’s began, Tandi served as one of the four waiters in a ‘not so big’ hotel in Raipur (Chhattisgarh). He had gone to Kerala, too and for a brief while he delivered newspapers.

As a waiter, he served water at tables; when there was a staff shortage, Tandi cleaned tables and plates, as well. His monthly salary – a meagre sum of ₹3500-4000; a major chunk of which he sent to his mother, Pramila Tandi, in their village.

However, the constant news coverage of the death and desperation caused by the pandemic in China, USA and Europe, frightened Tandi and brought him to his mother.

Incidentally, before his father left in 2017, the family had to sell their small patch of land for Pramila’s treatment. For the mother-son duo, the hut is all that they posses. One room is stacked with household essentials, they sleep in the other. 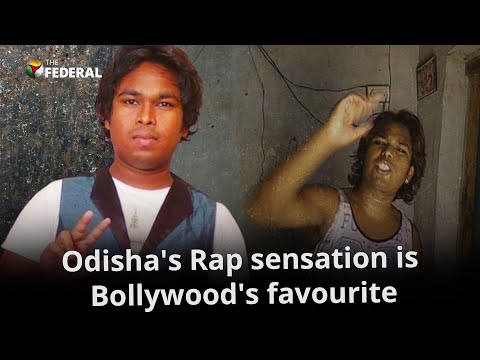 Even while on duty, Tandi wouldn’t stop humming his rap songs, which fascinated many customers. “Some also made false promises of support,” Tandi recalls. However, that failed to deter his spirit.

In 2014, someone from Punjab, impressed by one of his videos on Facebook had called him, and Tandi performed in Chandigarh. “I write whatever catches my eye a rap it,” he says.

A Chemistry graduate, Tandi secured first division in matriculation and intermediate level, but failed to repeat the feat in college for his B.Sc degree. In 2014, post college, with the burden of running the family on his young shoulders, seeing little hopes of a job nearby, he migrated.

Borda Sarpanch, Rina Rani’s husband Judhistir Jal, says, every year, 40 per cent of the over 5500 residents (approximately 2700 households) in the four villages in the panchayat, migrate to different cities in Chhattisgarh and Nagpur (Maharashtra) in search of livelihood. According to a local teacher, 10 per cent of those workers haven’t returned, yet.

“It’s unimaginable that he has overcome the back-breaking poverty and is a star, today. It happens only in the movies,” Jal says, adding, “Tandi has given our panchayat and district a new identity. He is our pride.”

In Odisha, many have evinced interest to give him a break. While some local composers have approached Tandi, leading music director in Odia movie industry, Abhijit Majumdar is planning, to start a music album with the rapper. Majumdar believes, Tandi is the first in the world to make a fusion of rap and folk music. “He is a big star in the making. The earthy touch in his music makes it unique,” says Majumdar.

Meanwhile, Tandi is waiting for the COVID scare to end, before he takes a train to Mumbai to meet Vishal and try his luck there.

“I can sleep on the foot path sir. It’s not an issue,” he says. Earlier not many, even his mother was interested in his music. “Now, everyone likes my songs. I may get financial support from others for the trip,” he says, innocently.

According to Sagaria, Tandi’s community has a rich musical tradition. Their performances- locally called gana-baja- are a popular folk music form in Odisha. Around 5-10 musicians- all men,  make a troupe, play traditional instruments like the dhap, dhol, jhanj, mahuri, nishan and tasha. Gana Baja is a permanent fixture during religious and cultural festivals and social events – when a child is born, during marriage and funerals.

“Given the odds he has fought against, there couldn’t have been a better role model or inspiration for thousands of poverty stricken youths of Western Odisha,” quips Sagaria.

BJP MP from Bargarh, Suresh Pujari who claims to know, Tandi for many years, is all praise for the youngster. “There are many unsung heroes like him doing spectacular work in different fields across the state. It’s the responsibility of the government to promote these budding talents for an enriched society,” Pujari says. “As an MP, I will take up his cause. We have done it earlier in the case of Sambalpuri poet and writer, Padma Sri Dr. Haladhar Nag,” he adds.

COVID may have killed over half a million people, destroyed many more dreams. However, the pandemic has provided a window of opportunity too to a few like Tandi.