When 27-year-old Shreya Ghosh opened her doors to a stranger for the first time in 2017, it was not a great experience. In an attempt to experiment Couchsurfing, Shreya encountered a man who tried to make a move on her.

“When you host somebody from a different country, state or city, you don’t just let them stay at your place. You too travel — through their stories and experiences,” exclaims Shreya, a Chennai-based English teacher.

Couchsurfing is an online platform that connects its members to a global community of travellers. Here, travellers can find a place to stay in a local’s house without having to pay anything. As of 2019, the platform has over 15 million travellers and 400,000 hosts across the world and it started operating in India in the early 2000s.

The platform is becoming popular in India as people here are becoming more open to host strangers, thinks 28-year-old Akshay Chaudhary, 28, an avid traveller and a ‘couchsurfer’.

“Five years back, when I started travelling, I had only a handful of friends who were planning to travel solo. But now, I see so many of them willing to explore more, try new things and meet new people,” he says.

In an era where people travel for social status, Akshay believes only a small section of Indians understand what travelling really means. “Through Couchsurfing, a traveller gets to understand a city’s culture, tradition and food, and can see the place in a much better way,” he adds.

Shreya, whose first attempt at hosting strangers wasn’t a pleasant one, has not let the incident stop her from doing so in future. “I am still in touch with people whom I hosted two years ago. Even today we make travel plans together and try to meet as much as possible. In this way, you can make really good friends irrespective of which part of the world you are in,” she says.

How to stay safe 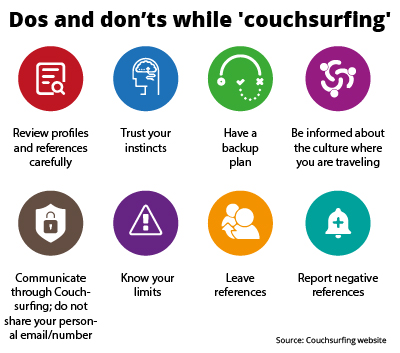 Well, most ‘couchsurfers’ are of the opinion that users should always be specific about the host’s requests and references while finalising their stay. Now, what is a reference? On Couchsurfing, both the hosts and their guests can leave references about each other.

“To differentiate between someone who is new to Couchsurfing and someone who has been travelling for some time, you must go through their profile. If somebody has travelled a lot it is evident on their profile,” says Shreya.

However, another ‘couchsurfer’, 23-year-old Gazala from Bengaluru, says that though references ensure authenticity, it holds true only to an extent. Mostly, it is the gut feeling that most people go ahead with while surfing through the options, thinks IT professional Shiv Ashish, another ‘couchsurfer’.

Besides, Couchsurfing is often used for “wrong reasons”, says Adarsh Hedge, another user of the platform, while recalling experiences of people getting mugged by their hosts.

“I have come across some people who want to try Couchsurfing for all the wrong reasons. A lot of my travellers have told me how they were mugged or really felt uncomfortable during their stays,” says Adarsh. However, he adds that he himself has had only good experience while hosting as well as visiting strangers.

Couchsurfing should spread more awareness regarding what it really means to ‘couchsurf’ and the essence behind it, asserts Akshay. He adds that it is important to convey such things to the users to avoid misunderstanding.

Users of the platform also think that it should link other social media accounts of the hosts and the visitors to get more details about them, besides identity verification via passports and delisting people with bad reviews.