Art heals, they say. But who will heal the distress of artists? With the COVID-19 pandemic robbing thousands of fine, performing and folk artists as well as teachers of art, dance and music of their livelihood, the artists’ fraternity has come together to help its ‘own’ amid the crisis.

Gajendra Sharma, a Bharatnatyam dancer, for one has helped more than 25 artists including dancers, painters and instrumentalists in Bengaluru by raising funds and facilitating online classes for them.

Sharma who runs almost nine art school branches in the city with more than 2,000 students and over 100 teachers across the disciplines of dance, music, vocal and instruments has himself incurred a loss of ₹ 9 lakh in the last 60 days. However, this hasn’t stopped him from helping co-artists.

“This is not the time to lose hope. We need to rebuild ourselves. I have helped dance and keyboard teachers and everybody who has reached out to me for help,” he says.

Sharma, who is helped in his endeavour by his sister Madhuri, also a dancer, has also ordered online groceries for several artist families in Bengaluru.

“We planned to utilise the available technology and our network in the city to raise funds. I started asking people to donate just ₹9 through a WhatsApp campaign and got a brilliant response. As soon as I started this campaign, people started giving me more ideas,” Sharma says.

He, however, says that artists don’t want to show themselves as needy or distressed. “Their heart doesn’t agree to take help from anyone. Their self-respect is everything for them,” he adds.

In rural India, lack of gigs have forced many folk artists to wash the greasepaint off their faces and take up the plough.

Thousands of rural folk artistes earn whatever they can for the entire year through temple festivals and related programmes between March and July. With the lockdown coming into force, all such festivals have been put on hold, leaving the artists in the lurch.

“Many folk artists are now living from hand to mouth,” says Priya Murle, a senior Bharatnatyam dancer and a member of ABHAI (Association of Bharatanatyam Artistes of India) which is helping folk artists and their families during the pandemic.

“They don’t have anything to do. And such is their plight that they don’t mind taking help even if it is just ₹1,000. Their call for help is getting louder,” Murle says.

Murle with the help of ABHAI has helped over 90 artist families, most of them folk artists, so far. “The sad part is ABHAI as an association has been unable to seek funds from abroad like we did last time during the 2015 Chennai floods. As this is a worldwide crisis, it has been difficult” Murle says.

Gayatri, vice president of Samparna for arts and wellbeing, an NGO that is extending help to folk artists says, “The folk artists we are in touch with are literally pleading for help. We are thankful that we have salaries and roof. For them, the entire livelihood is just art.” 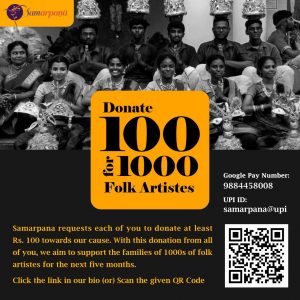 Samparna is running a campaign called “100s for 1000s,” which is aimed at helping families of artists hit by the pandemic. Through the fundraiser, Samarpana is appealing people to donate a minimum of ₹100 to support the families of thousands of folk artists.

Related news: How a Tamil parody song may have foretold FM’s announcements 10 years ago

Left with no work, several folk artists are turning to agricultural work. “People who are financially doing well can handle such a crisis without working for two or three months. But people like us cannot take care of all our needs unless we go to work regularly. Right now, we are trying to make do with the bare minimum,” says Pandiselvi, a Silambam and Paraiyaattam artist in Tamil Nadu. Paraiyaattam, also known as Thappattam is a folk art form in which artists beat the parai (drum) and dance to its rhythm during temple festivals, funerals and sport events.

Arumugam, a Therukoothu (a form of street theatre) artist in Tamil Nadu’s Villupuram has no hopes of getting back his livelihood. He is part of a folk art team of 16 members. “We are a crew of 16 and none of us has any income right now. We are doing a bit of farming and barely getting through. Recently, with the help of a broker we got ₹4,000 from a private company, but what good can it do to 16 people?” he says.

Need for an artist corpus

Several artists have rued the fact that the central government’s 20 lakh crore stimulus package made no mention of them.

“I just think the government should have an artist fund. In foreign countries, there are grants for artists. I am sure the government is doing its best, but unfortunately it is not enough,” says Gayatri.

Related news: COVID: Death warrant for some, lifeline for others in Kannada film industry

Sharma who’s been frequently writing to state and central government leaders about the issues faced by artists says the government should allow them to take classes. “I just have one request. Let us resume classes. I promise we will follow the rules. I understand the government’s concerns, but it should have faith in us,” he says.

We can give them space guys: Ashwin asks fans...