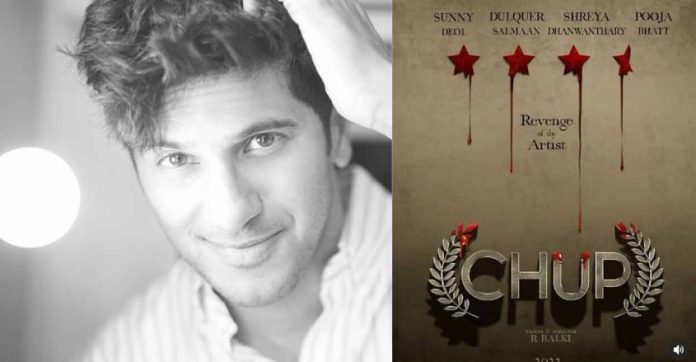 Dulquer Salmaan called this project with Bollywood director Balki as an ambitious one. Pic: Twitter @dulQuer

More news has started filtering in on director R Balki’s new film ‘Chup-Revenge of the Artist’ with Dulquer Salmaan and Shreya Dhanwantary, after the film’s unique motion poster was unveiled on social media on October 10.

A psychological thriller, Balki’s new film, which also features Sunny Deol and Pooja Bhatt, was announced in August. Besides Dulquer and Dhanwantary, who had shared the first look poster of the film on their Twitter posts, Amitabh Bachchan and Akshay Kumar too unveiled the motion poster of ‘Chup’- Revenge of the Artist’ and the post went viral on Twitter.

Dulquer, who had earlier shared the poster on Twitter writing that he had been waiting for this day to unveil their “ambitious” project, also thanked Bachchan senior and Akshay Kumar for tweeting the poster. While Shreya Dhanwanthary went ga-ga saying that she had been “dreaming, sitting, waiting, wishing, hoping for the day I can yell, “CHUP!” .

“This is a dream come true & I cannot wait to bring this to all of you!!!”, she wrote on Twitter. The poster is unveiled even as Guru Dutt sings the iconic song, ‘Yeh Duniya Agar Mil Bhi Jaye to kya hai’ from ‘Pyaasa’ maybe suggesting that the film is meant to be an ode to the great filmmaker. Balki chose Guru Dutt’s death anniversary to announce the title and launch the first look.

According to a Wion report, Balki has reportedly said that ‘Chup’ is an ode to the sensitive artiste, and Guru Dutt is right on top of that list. He had the story for a long time with him and he is glad that they finally wrote it and almost done filming it.

Photographs of Dulquer and Balki from the shooting spot in Mumbai had gone viral a few days ago. The movie is directed and written by R Balki and produced by Hope Productions and Rakesh Jhunjhunwala.

‘Chup’ marks Balki’s foray into the thriller genre, said an Indian Express report. Announcing the film in August, Balki, who is known for films like Bachchan and Tabu starrer ‘Cheeni Kum’, ‘Ki & Ka’, etc., had said that it was exciting to start shooting after months of lockdown. And he was more excited that he was making a film in a genre that he had not attempted before.

Balki ostensibly had the idea for a long time but never quite got around to writing it, and while it’s fundamentally a thriller, he said that it banks so much on these four stunning performers. He said he couldn’t wait to get into the edit room